My First (and last) Blind Date 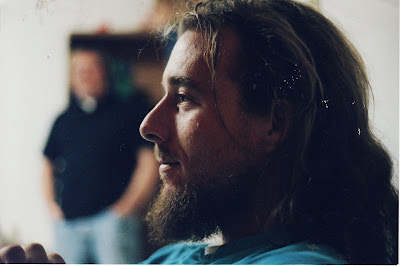 In case you were wondering, I met Micah 5 years ago this month. He called me and asked me out on a blind date. It was my first and last blind date ever. I was at my apartment in Provo, Utah when the phone rang. It was my friend Karly giggling like a little schoolgirl on the other end. She said that this boy wanted to talk to me and his name was Micah, then handed the phone over to him.
They had been browsing through an astrology book when Micah discovered that the perfect match for a Sagittarius (his sign) was an Aquarius (my sign). And naturally, he wanted to ask an Aquarian out on a blind date to see if it would work out. Karly thought of me.

Our phone conversation went something like this:
"Hi my name is Micah. I am a Sagittarian, and you are an Aquarian. According to this book, you are the perfect love match for me, will you go on a blind date with me?"

I agreed, and hung up the phone laughing and thinking, "Who is this guy?"
The only information I had gathered was: His name was Micah. He worked at a Wilderness Therapy program in Southern Utah. He was visiting my friend Karly on his week off, whom they were old friends. He is a Sagittarius. I am his perfect love-match-Aquarius.

A whole month later we finally went on our date, mostly because Micah had left town and he didn't know when he'd be back to Provo again. When he finally called me I definitely remembered him and got nervous that this date was really happening.
The night came when we made arrangements to meet. I was trying not to be nervous, especially because when you think about it, the whole thing was a joke. I mean, he didn't really think I was his perfect love match, did he? He just wanted a blind date for the awkward experience of having a blind date. (That is so Micah, I find out later!)

I drove over to the house he was staying at. I remember everything I was wearing: Gray slacks, black blouse, blue down coat, rainbow beanie. Really besides the point, but It was a memorable night, after all, and I remember trying to pick something out that was neutral and blind-date esque.
I knocked on the door, and waited. I had no idea what to expect. Three things crossed my mind.
1. This doesn't matter. It's all a funny joke anyways.
2. If he's way unattractive and creepy, at least I might get a free meal out of this.
3. I can always fake menstrual cramps and leave early.

The door opened and there was Micah. Tall, handsome, smiling Micah. He was wearing a woven Mexican sweater, ragged trousers, a colorful beanie like mine, and long, wavy, curly hair. His whole persona was screaming hippie-homeless-mountain-man. I absolutely loved it!
Oh and the biggest beard I've ever seen.
He got out his disposable camera and took a quick snapshot of me. I'm still not sure why and I've still never seen that picture to this day. Then he told me right away that he is NOT a rock-climber, so that we could get any over-idealistic expectations out of the way, in case I had a thing for rock-climbers..

We enjoyed some not-so-awkward-small talk in the living room until he asked me what I wanted to do on our date. Naturally, I wanted to climb up to the highest rooftop in town and shoot water out of my rubber chicken.

So we did.
We climbed onto the roof of the Provo bell tower and that's where we spent most of the evening. The sky was clear, the air was crisp, and there wasn't anywhere I'd rather be  than laughing, talking, telling stories, and shooting water out of my rubber chicken off the roof and onto the ground below, with this Micah Jackson character.

Then we got hungry and went and ate Mexican bean burritos at 2 in the morning at some hole-in-the-wall restaurant.
Finally, I dropped him off at his place and said goodbye. No kisses: just a big, happy, hippy hug goodbye.
We both had a fun time together, but didn't make any future plans to go on another date.
The next day I asked my roommate, "So how long do I have to wait to call him for another date? Because I don't think I can wait any longer!"
She replied,"Do it now!"
So I did. I called and we set up another date for the next time he would be in Provo.
The rest is pretty much history...
That first date was by far, the first, last, and best blind date I've ever been on! And for those of you that don't fully believe in astrology, I agree. But that doesn't mean the Heavens didn't have something to do with this.

I love you my Micah, my Sagittarius!