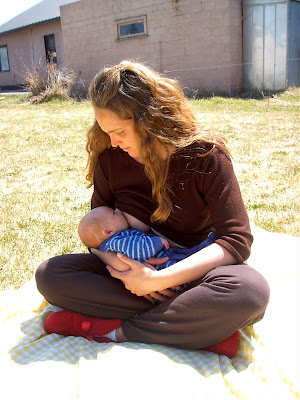 A single, male friend recently asked me (quite nervously), if women "give up" their sexuality while breastfeeding. He seemed to be concerned that we mothers hand over the breasts to the children, and henceforth glory in their true function from then onward! I replied that breastfeeding is an amazing and glorious function of the breast, but to forget that it is also a sexual organ is quite foolish. And vice versa; breasts are sexy and attractive, but they were also specifically designed to nourish our babies.

It's unfortunate we live in such a culture that can't seem to distinguish between the two. My male friend who feared his future wife would leave him hanging after the kids arrived, clearly didn't realize that women do not have to choose between the two functions when they become mothers. More likely, each function can be used at different times, for different purposes. Yes, you can still be a powerful, attractive, and sexy, breastfeeding mother.

In an American culture that only sees breasts as the sexual icon of women, it's no wonder mothers struggle with feeling comfortable and normal in using their breasts to feed their babies.
We live in a society that tells us to go hide in the bathroom, or cover up while we're breastfeeding. Fear is instilled in women that our sexuality will be exposed, that we'll be immodest, that we'll be flaunting our goods inappropriately, (while simply trying to feed a baby!!) It's, to say the least, ridiculous.
When using our breasts as a function to nourish our babies, there is no reason why we can't do it openly, and uninhibited. There is nothing sexual or embarrassing about feeding a baby.

I only wish we lived in a culture that could make this distinction; that breastfeeding mothers everywhere could stand tall, and breastfeed when, where, and how they need. I feel so frustrated and sometimes angered when I see a mother cautiously, and nervously get out the giant blanket. It's especially insane when mother and baby engage in a sort of crying, screaming tug-o-war, to keep the blanket in place. It isn't anger for the mother, but angry for a culture that doesn't support mothers the way we need. Our society forces women into stinky bathrooms, hot cars, closed offices, and sometimes behind bushes, all because we might be seen exposing some breast. (Breast that has kept the human population alive.) I also add that there is more breast exposed on the cover of Cosmo, and no one is complaining about that.