My husband and I both remember when the world of make-believe started. Our 16 mos old had wanted some juice. We both looked over and saw him with the juice pitcher pouring some pretend juice into a cup, and drinking it. He had discovered the immediate rewards of imagination!

What happened in the following months was pretty spectacular.
I recall him asking me for a toy sword one day. So I pulled out an invisible sword from my pocket and started to fight him. He immediately got upset, crying "No! IIIIIIII wanted the sword!" So I quickly handed him the invisible sword so he could play with it. I remember seeing his face light up as he became the master of this mighty make-believe weapon.

Suddenly our world became so much bigger. When he is hungry for ice-cream we can sit there and eat heaps of it in imaginary bowls, filling our mouths with imaginary mouthfuls of chocolate and strawberry flavors. Imaginary balls are thrown and caught. Imaginary bridges are crossed through imaginary forrests. Imaginary rocket ships are launched into space.We can imagine anything and make it happen.

The best part for me is that it solves a lot of situations where we just don't have what he needs. One day he wanted to go outside and make a snowman but the snow wasn't sticky enough. So we found ourselves sitting on the carpet in the living room, building the biggest, most jolly old snowman we could think of. We were laughing at how silly he looked with such a large carrot for a nose, and never questioning that he was just a pile of air.

Micah and I have really enjoyed watching our son's imagination flourish. Each day he becomes a new character. He wears the name proudly, often demanding that we call him "Willie Wonka, Spiderman, Annikan Skywalker, Robin Hood, Rudolph the red-nosed reindeer, or even the Wicked Queen", as he maintains the depth of his character's personality throughout the day. If you accidentally call him Zadok, you will be asked kindly, "Call me Robin Hood." 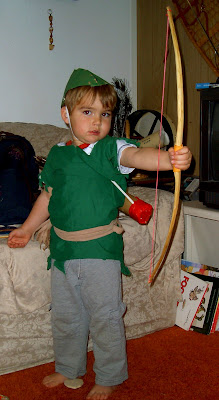 He also assigns roles. For instance, if he wakes up as Superman, you will most surely be Lois Lane for the duration of the day. And you'd better know your lines, too!
(Oh Superman, save me, save me!) (I'm coming Lois! I'll get those bad guys!)

I still can't believe Zadok is turning 3 years old next month. With all this growing up, I sure hope our world of make-believe can grow with us.

(After all, I can make a pretty impressive, imaginary Tiramisu. Want a bite?) 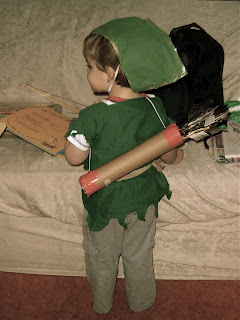 A few props from around the house enhances our make-believe role-play.
Posted by Sally Jackson at 2:08 PM