Just fresh off the plane from my trip to Eugene, Oregon! Ah, I just love that place, and had such a bitchin time! I just spent the past 10 hours traveling with two small children, on two small planes, through three small airports. You'd think I'd be pooped out with seven small headaches, but I am wired. Maybe it's because coming back from a trip always brings fresh perspective! Or maybe I'm excited that my wonderful husband shampooed the carpets while I was gone! I walked in the door and my house didn't smell like the eternal fart anymore. Yipppeee! I love you deary!

Or maybe I truly realize that every time I leave and come back, I am different.
I think that It doesn't matter where I go, or how long I'm gone, but seriously, every time I go on a trip, I come back a little bit changed. And change is good. At least for me. I don't know that I could change for the worse. I mean, I guess it's possible. But in this case it's not possible. I came back feeling better than ever.

I had such a wonderful trip and so much I'd like to blog about. But I will leave with this story, because it is way past my bedtime:

As I was descending into St. George with two sleeping kids on my lap, I sat there wondering how I was going to get them, my two carry-on bags, two duffel bags, a skateboard, and two car seats, off the plane and into the parking lot. As I was just starting to feel overwhelmed and on the verge of tears, an angel appeared. Not a real angel, you sillies. Well, at least I don't think it was?
It was a really, incredibly nice, passenger guy in a business suit, who insisted on carrying all my bags to my car. I was so grateful! I kept thanking him over, and over, and over. It was just such a nice thing to do! And the kind of thing that makes you want to spread the good karma around some more.

Off to spread some good karma, To be continued. The airplane adventures of Zadok, Odin and the Mama! 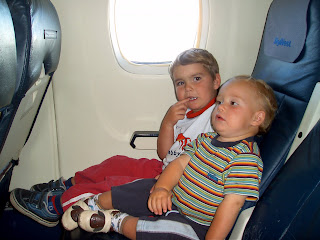 Email ThisBlogThis!Share to TwitterShare to FacebookShare to Pinterest
Labels: Just my thoughts, kiddies

sally I love keeping up with you and your cute family. I was wondering if I could call you sometime. Can you email me your number to emilyjtimmreck(at)gmail(dot)com?

p.s. I LOVE the story about the good Samaritan! that is awesome!

I haven't heard the word "bitchin" since high school My high school. hee hee. Although you told me this stuff, i love reading how you write it and we had such a wonderful time.