I am so extremely proud of him!
He's been working so hard, almost beyond the limits of his ability-

Working away from home most of the week, to come home to his father and husband starved family, only to turn away from us to finish drudging school assignments. Which is, something he absolutely hates to do, but has to force himself to do it, for the welfare of the family.

Pretty soon this nonsense will be all over and he'll have his real job. We can't wait!

It's been a long road, through an often-times very dark tunnel, since he decided to go back to school. It wasn't an easy decision. He was forced to fore go his first career life as a Zookeeper, and his second career life as a free-wheeling wilderness guide, to meet the financial demands of a growing family. It would have been so easy to just do what he already knew he loved to do. I often imagine what our lives would be like, had he accepted that last Zookeeper job he got hired for. We would be living in Central California, in a cozy, little beach town. Our kids would go to the Zoo everyday to see their Papa work. I'd be surfing on my free time. Awwwwww, beach life. But, we knew in our heart of hearts that we were supposed to do something else. When we turned down that job, we did it with such fierce reluctance, that although we knew it was right in every way, we would look back with regrets sometimes, anyways. 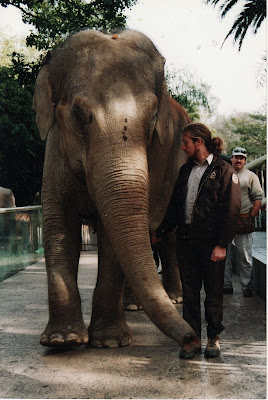 Micah in the height of his Zookeeper days. 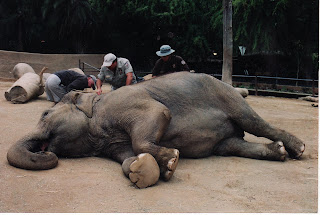 It takes a lot of courage to jump into the unknown; to leave behind the comforts that you are so used to; to sacrifice yourself and all your time and energy for others. But he has managed to do it.

This week has been a particularly hard one for Micah. He had some serious deadlines to meet, which would determine if he's able to start student teaching on time, like we had planned.
He just informed me that he passed the deadlines, so I am just really, really happy for him---and all of us! Life goes on!
Posted by Sally Jackson at 7:00 AM

Email ThisBlogThis!Share to TwitterShare to FacebookShare to Pinterest
Labels: 30 days of happiness, marriage, the Zoodude

As always, your words are beautiful. This is a touching tribute. And those girls in your ward lucked out to get you as a leader!