When I was 11 years old, I lived down the street from a place called Sharks Cove. This particular cove is world-famous for it’s snorkeling and scuba diving. It’s coral reefs are filled with bright, tropical fish, and underwater beauty, which can only be seen once you plunge beneath the bright blue waters of the pacific ocean. 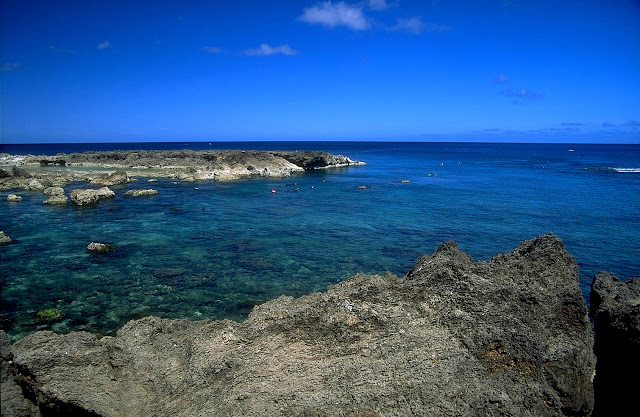 As a child, my brothers, sister, and friends spent hours and hours exploring these reefs. Our entire summer months, and even after school days, were spent swimming and diving amongst these breathtaking reefs and corals. Once we dove beneath the calm waters of this cove, we entered into a beautiful world apart from everything else.
Sharks cove became a second home to us, as we practiced diving deep; swimming with the sea turtles, poking at the vibrant colored sea urchins, collecting sea shells and other treasures, swimming circles with the massive schools of fish, and letting the sun warm us as we lay on the rocks.
One of our favorite pastimes was swimming through underwater caves. There were quite a few caves at Sharks cove, all different lengths and sizes. None of them were very long, and we could all swim through them with minimal diving experience. After so many years of swimming, holding our breath underwater became second nature to us.

There was “crab cave”, which was a tiny cave with an air pocket at the top, filled with black crabs. There was “turtle cave”, where all the sea turtles took their naps. It wasn’t very long, and you were almost always certain to bump into a turtle as you swam through. There was “elevator cave”, which you had to swim down about 10 feet, swim through a small opening in the reef, then shoot up to a small hole at the top of the rocks. There was”L” cave, shaped like an “L”. This was my personal favorite, because there was a sea current that pushed you through it real fast so that you never had to hold your breath very long. All of these caves were fun and brought us hours of enjoyment.

This cave wasn’t much unlike the others. It was rather short, you didn’t have to hold your breath long, and was right there in the cove. But there was one BIG difference. In order to get to the entrance to the cave you had to walk over the rocks to a crevice. Then you had to sit on the edge of the crevice, with your legs dangling into the opening of the cave. Then you had to slip down into the water of the opening of the cave, which was pitch black, and to an 11 year old girl— this spelled scary.
Everyone told me, til they were blue in the face, that it looks scary at first because you can’t see where you're going, but once you dive down into the blackness, a tiny blue light appears. Just follow the light until it gets bigger and bigger, and you're almost out.
Okay I thought, “Dive down into pitch blackness, keep swimming, hold my breath, see a tiny blue light, start swimming towards it....” Yah right! I might as well die right now!

One Saturday Morning I woke up before everyone else. I grabbed my diving mask and headed down the street to the cove. I started walking out to my usual jump off point then stopped short. It was a beautiful, calm day. The water was crystal clear and sparkling. The breeze was calm and peaceful.
I walked out upon the rocks to the opening of the Big Blue cave crevice. I sat on the edge, I dangled my feet into the pitch, black water, I put on my mask and I dove down. I was so nervous. I was so scared. I wanted to stop myself. I wanted to say, “You can’t do this, you have no idea what’s going to happen, you can’t see ahead, you are going to fail.” But something changed inside me that day, and I jumped right in.
Swimming down into the blackness felt like forever. It seemed I was just swimming deeper, and deeper, and deeper, until finally--the tiny blue light. I swam towards the light, it got bigger and bigger. I stopped for a moment and looked around and saw why this cave was called BIG BLUE. The blue light illuminated the cave so brightly, that I was suddenly surrounded by the prettiest, blueist, ocean colors I have ever seen, on every side of me. It was a moment I will never forget. I then swam towards the light of the sun and finally popped my head up on the other side. I DID BIG BLUE!

From that day on I couldn’t understand why I had been so scared and so hesitant to do it. Once I had done it, I could just keep going, and do it over and over. I never questioned myself again. But I know why I was so hesitant, because I couldn’t see where I was going.

There are many times in my life where I can’t see where I am going, and I feel myself tense up again, just like I did in those days of Big Blue. Right now, as Micah is finishing up school, and we will be applying for jobs, I can honestly say I am scared. We moved to Cedar City without knowing what was in store for us here, and fell in love with it. We made plans to stay here forever. However, the hope for a job opening for Micah is really...just hope. We don't know where we will end up, and I feel like my legs are dangling into deep blackness again.

I know there is something beautiful, bright, and wonderful in store for us, wherever we go, I just need the courage to take that jump again....deeper and deeper until we see that tiny light.

Shark's Cove on Dwellable
Posted by Sally Jackson at 2:58 AM

This was beautifully written, Sally, and is a perfect metaphor for life. Thank you!

Seriously - I read a lot of blogs - I've never read one so entertaining and insightfully written. You're pretty much amazing.

Though I'm a little biased - this caught my attention because I lived in Laie for 3 years.

Feel free to post more stories of the North Shore! After having the time of my life as a college student there, I can only imagine how much fun it was to grow up there...

Yes, excellent analogy & so well written Sally Wal but besides the relevance to now- I might add ~ I WAS ALWAYS SO NERVOUS ABOUT YOU KIDS GOING THROUGH THOSE FREAKIN' CAVES.