Boys will be boys

Some kids like to snuggle with teddy bears, some kids a special blankie or snuggly toy. Our child--a Star Wars lightsaber. What is it with little boys and Star wars? I love it! 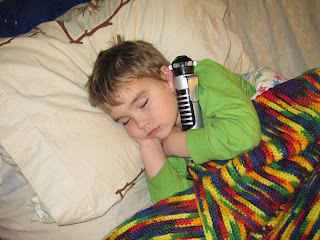 Favorite thing we heard Zadok say this week:
We were outside the St. George Temple visitor Center when a rather large, overweight couple strolled by. Zadok stops, looks, and says, oh so matter-of-factly, "Hey-those people sure have eaten a lot of food!"
It was the most pure and innocent observation!

And this little boy down here is danger! There's nothing that makes me feel more vulnerable, than when one of my kids gets hurt. Odin likes to fall on his head. The other night he fell off the back of the couch and bit his tongue. When I went to pick him up he was blacking out, eyes rolled in the back of his head, bone-limp body. When he came back from his state of lifeless zombie (2 seconds later), I was so relieved (and crying my eyes out)! I absolutely hate that! And it's not the first time. He is such a wild, and adventurous boy. 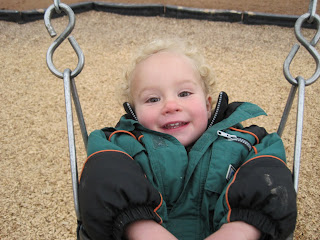 Favorite thing we heard Odin say this week: "LET. ME. TRY.!" If we try and do anything for him that he thinks he can do himself, he belts this out, in the most low pitched, papa bear voice he can muster up. It makes me laugh every time, even though he is so seriously trying to tell me to back off!

I love these boys! Some days are so exhausting trying to keep up with them, But, they don't seem to notice, so I have to carry on. Here's to another high-energy-filled day of little boys!
Posted by Sally Jackson at 4:05 AM

Way to warm a grandma's heart who sure misses such amazing little boys & their parents.

your boys are so fun to read about. that blacking-out stuff does not sound fun at all!
love that "i can do it" second child-ness, that is ivy to a t also, they have to do it all like the rest of us!
glad you had a happy birthday too!

oh, and i dig the dino bag!

Ha ha ha! I love Zadok's comment. Both my kids have made similar remarks about people's size. Innocently of course. But as the mom, you're left trying to smooth things over.