When our 4 yr old was just 2 years old, and we were living up in Idaho, we had a real hard time getting him to sleep at night. We tried reading books, we tried singing songs, we tried watching a boring movie, we tried turning the lights off and telling stories, and yet still, his eyes were wired open til way past all our bedtimes!

Looking for a gentle solution, that's when Micah decided to start the "Mei-tai walks," which quickly became a special tradition for months to come.

Every evening, at about 8'oclock, Micah would tie our toddler into his Mei-tai. It became a nightly routine, as Micah put on his heavy gloves and hat, zipped up his jacket, and covered up the little one with warm blankets.
Even on the coldest, Wintry nights, with snow falling down, and breaths full of steam, Micah would slowly walk around the block, singing folk songs, and holding Zadok tightly until he fell asleep. 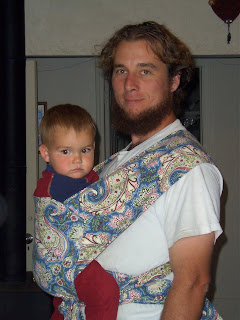 (getting ready for a bedtime walk)

I remember one night Micah lumbered in from a particularly long walk. Zadok was fast asleep, all cozy and warm in his Mei-tai and blankets. But Micah, he was covered in snow, his beard was frozen stiff, and his eyes just looked so red and tired.
However, there was this immense look of love and concern in his eyes, too.
He would then untie Zadok, place him on the bed, and never leave his side until he knew he was fast asleep.

Last week as I was reading this old memory to Zadok from my personal journal, he had the cutest and goofiest look on his face. I could tell that he really liked this special memory of him and his papa. Later on, when Micah came home from work, he asked, "Can we do a Mei Tai walk tonight?"
I watched as they walked off down the street, Zadok snuggling closely into his Papa, just like they used to. It was very sweet. 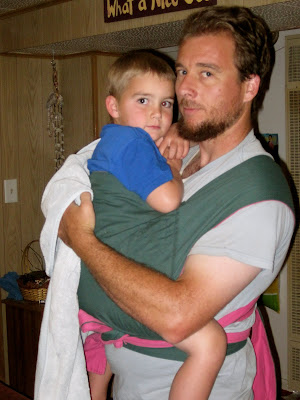 I am so grateful for a Father that takes time for his kids, even when it's not always convenient. His boys always come first, and I can see that same love and concern for him, reciprocating in their eyes.

Happy Fathers Day to a papa that cares.
Posted by Sally Jackson at 12:25 PM

Email ThisBlogThis!Share to TwitterShare to FacebookShare to Pinterest
Labels: babywearing, the Zoodude

Sally it sounds like you have a great man on your side. I can't wait to meet your family someday:)

This one brought tears to my eyes. He is such a good papa - you are very, very lucky.

How very precious that Zadok asked for a mei tai walk...I absolutely love this. And I love your whole family. We'll sure miss you when you leave :(