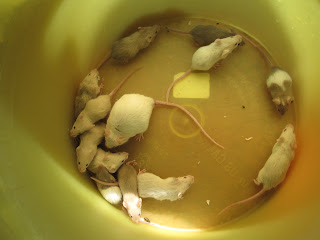 3 months ago, 2 female mice were purchased for a birthday surprise. One of them got sick, so we asked the pet store owner if we could feed it to a snake. After watching a large snake devour our pet mouse, we took another female mouse home, who turned out to be a male. They mated. Several weeks later we had 14 babies on our hands. The night before she gave birth, we donated our male mouse to someone else's pet snake, so they couldn't mate again. The babies were adorable, and we watched them eat and grow, until they weaned from their Mama. However, back to the pet store, Zadok sold the 12 remaining baby mice (after one was eaten by his mother, and the other drowned in the water dish) for a whopping $3, which he proudly saved in his money bank. Now down to one, pet, female, ex-Mama mouse, I posted her on Freecycle, and a teenage girl came and picked her up a few days ago because she longed for a pet mouse again. (because her last one escaped and starved to death.) And that's the end of the mouse saga. Why, you ask, did we go through all of this mouse drama?? I don't know man, I don't know. But I do know that we are very happy now with our one goldfish and ant farm.
Posted by Sally Jackson at 9:56 AM

those mice are crazy multipliers!

and, i would love to send you some fabric and pay you to make me a mei-tai! i have a bjorn but really want one of the ones that you make!

Mei-tais are heavenly! One of the best things that ever happened to this fam was discovering and using a MT!
So, I am about to have a baby, but if you seriously want ME to make one, you'd have to send the fabric now. A light canvas material works. About 2 1/3 yards. Or, I can just make you something with fabric I have, and if you hate it you can buy one online. :)