Odin dragged all his "friends" into his bed with him a couple weeks ago. After he plopped them all down he got the saddest look on his face and cried,"Now where am I going to sleep?"
He was so genuinely upset and concerned. I tried hard not to laugh. Micah came in and showed him how to line them all up so everyone could fit. Here's a happy Odin, sleeping with his animal friends: 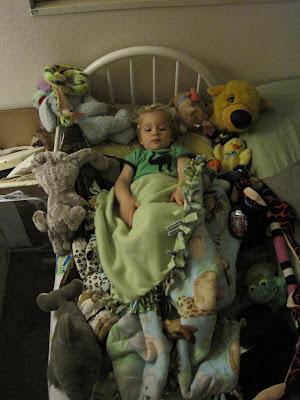 There's a lot of new toys around here which has been really fun! (thanks friends and family and secret Santa!) We were all really looking forward to Christmas so we could get some cool, new things for the boys to play with. We don't buy a lot of toys very often because we've noticed that things start to recycle themselves after awhile. For instance, nobody touched the stuffed animals for about 6 months, now all of a sudden they've become the most coveted thing in the house this past month. They've been carrying them about, making up stories about them, using them as props, weapons, and even cuddling them in bed. It just came out of nowhere! I'm so glad I didn't throw them out!
I've noticed that even if we buy a cool, new toy it is only as fun as their imaginations allow it to be. Most of the toys we buy aren't really used the way you'd think they should be! Our toy broom is a magic wand or sword most of the time. The rubber animals make great booby traps in the hallway, and the doll house is a dinosaur lair. We just don't need a whole lot of toy turnaround because 6 months later they'll turn their old toys into something new.
We do have some favorite staples, however, that we love to play with regularly:
playdough
puzzles
costumes
stuffed animals
board games
action figures
Random toys we find at the thrift store
ropes, strings, blankets, and handkerchiefs (for whatever)
flashlights
puppets
modeling clay
giant Leggos or other building/stacking materials

But, the most important thing we need is to relax, have fun, and play together. We could buy every new toy in the world but it just wouldn't be fun if nobody sat down and played.
Posted by Sally Jackson at 12:16 PM

I used to do this! LOL. I didn't want to hurt any of my toys' feelings. So I'd pack them all in so I couldn't wiggle on toe. Love that Odin.

This is one of the most precious pictures I've ever seen in my love. I sure love that Odin too. Also, Arianne's comment - so cute.