Raising kids is hard.
My friend who is pregnant with her 3rd, recently asked me how it feels to be a mother of three so I told her,"It's overwhelming." And she replied, "Oh! Well, thanks for your honesty!"

Ironically, I think it's because I've allowed myself the freedom to admit that it's hard, that I've been able to relax and have more fun with it. For me, knowing something is hard is better than trying to constantly convince myself that it should be easier.

In the past I've complained that going grocery shopping is hard, a trip to the library is hard, a simple walk down the street is hard, all the while wishing and arguing that it should be easier to do these normal things, with 3 kids.

It's not easy because raising kids is hard work....as it should be.

Hard work became my mantra when I was in labor. I would say over and over again, "Labor is hard, and it hurts, but you can do it."
The honesty in my words allowed me to open up and birth my babies joyfully, instead of fighting against it, and spending my energy wishing against it. Giving birth became easier once I accepted that it was hard.

For me, knowing something is hard, makes it easier to cope with.

So yes, raising kids is hard, because it just is.

And I'm totally okay with that now.
And we're having a lot of fun.

Especially when I have Spiderman by my side. ;) 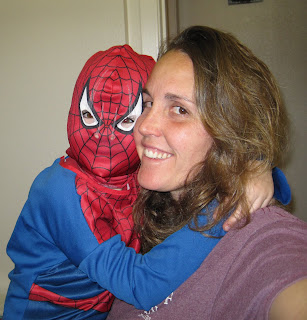 Posted by Sally Jackson at 1:28 PM

One was hard. Two was hard. Three was harder. Four is kicking my butt some days. But it's worth it. Love your honesty. We're all in this together.

At least you got to be eased into three! I feel like I was thrown from the relative ease of one baby to the chaos of a house full.
Whenever things get hard, I always remind myself - "would I prefer the alternative: sitting at home or at work with NO kids? Heck no, bring it on!"

I think I told you, while you were expecting #3 that after my #3 arrive, which was you, I remembered declaring one day in my mind, "I have ALOT of children." It was overwhelming... and yep, raising you four was often "hard" yet, within life's constant irony, I find myself often wishing for a time machine to go back to those days.