There is a secret power that one can possess, if they truly desire to help animals. The power lies in the bear paw symbol, which can be activated from the front of an ordinary T-shirt.

First you have to touch the animal that is in trouble, which will then trigger the activation of the creature powers of which that animal holds. Next you touch the bear paw and shout out, "Creature Powers Activate!"

Creature powers can be anything from webbed feet, to gliding wings, to underwater gills, to extra speedy, Cheetah-running power. Once you have the power of that creature, you can BE that creature. And, along with other super-powers of strength and stamina, this is the ultimate secret weapon of rescuing hurt or endangered animals.

Within the wild minds of two very excited little boys, this animal-power-activation process all works out, and has made two little boys very serious about animal rescues!
They have been watching this show called Wild Kratts, on PBS kids, and along with their own imaginations, have created a world all their own.

It's all about saving animals at our house these days, and every day brings new opportunities for adventure and fun! 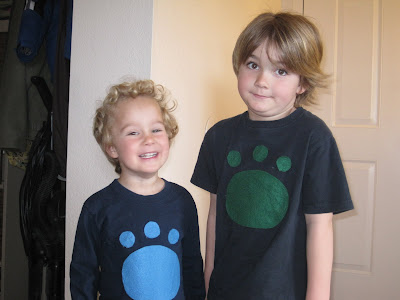 Creature Powers Activate!
**T-shirts found from dresser drawers, with felt glued onto them work marvelously.
**Yesterday we picked up litter from a nearby creek, for the animals.
***Several days ago they saved a worm from drying up in the sun.
***During the week we feed the ducks and geese, and pigeons.
**We wander the forest looking for animals in trouble.
Posted by Sally Jackson at 8:43 AM

I've got to show these to Sam. He's so into the same show on PBS kids.

My boys saw a commercial for Wild Kratts at my mom's house awhile back, and they were SO excited to see it since we love anything Kratt brothers. Sadly, we don't get PBS Kids here at my house anymore, so we've been re-watching the few video clips and playing the games on the website. I think we might have to make these shirts too. Super cute!