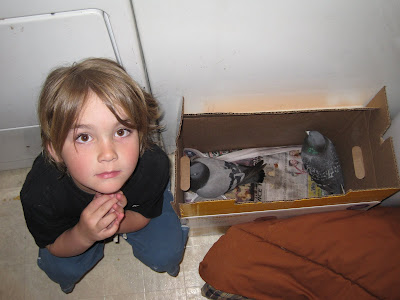 Apparently, every Spring the apartment management here hires a pest control company to take out all the pesky pigeons. As we've been walking around our apartments lately, we've noticed lots of dead pigeons. Some of them were even suffering, taking days to die. It made us feel sad, and angry.
"They are vermin, pests, and a health violation to those that live here!," said the manager, when I called to complain. However, what our son saw were little, helpless creatures that deserved a chance. 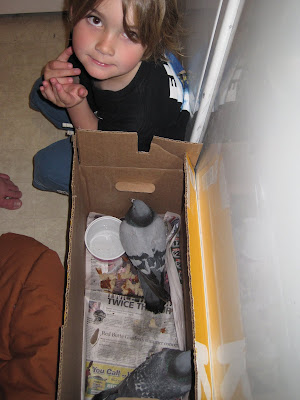 Micah and Zadok went and got the two sick pigeons and and put in our laundry room. They were barely moving, looking almost dead. Zadok gave them water, food, and a warm box to live in.He checked on them all day, every day. We changed the newspapers when they got too poopy. We put them out on the balcony for fresh air. 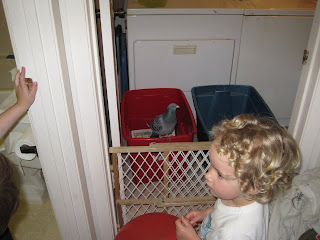 Then suddenly, after several days, we looked into the laundry room to see a flying pigeon! We quickly opened the door and let him fly free. Zadok had the biggest smile on his face to see his animal rescue mission a success!

And then, about a week later, we released the other pigeon at the farm nearby. Although he couldn't fly, his overall health seemed back to normal. We watched him waddle into the bushes, and peck around for food. Zadok sat and watched him for quite some time. He didn't want to leave unless he knew "Pidgy" would be safe. 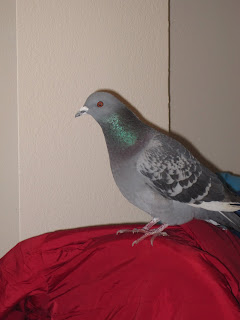 This past month at our apartments we have witnessed the emergence of baby ducklings, baby goslings, and then the sick and dead pigeons. Everyone here loves the babies because they are so cute, but everyone hates the pigeons.
Zadok sees them all equally, as creatures that God made.
I am so proud of our boy. He has become such a wonderful, loving, and nurturing person. 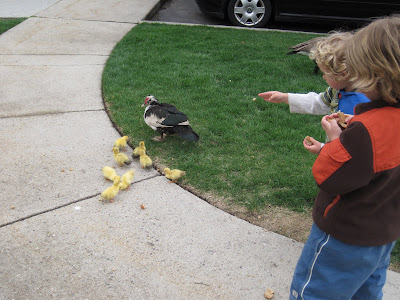 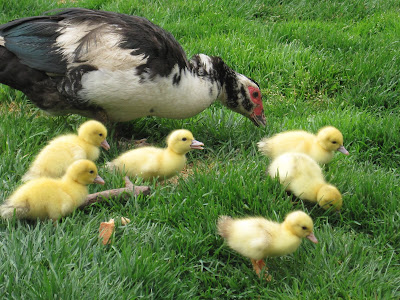 Posted by Sally Jackson at 1:59 PM

What a sweet boy!