I feel like I can't express enough how grateful I am to be in our current situation.
I remind my family all the time how lucky we are. I say daily prayers of gratitude to my Father in Heaven for giving us these blessings. I tell our landlords frequently how happy we are that we met them and found this place to live. I bore my testimony at church, publicly acknowledging the prayers that have been answered and the blessings received, in order for us to be where we are right now. I retell the miraculous story of our moving to Hawaii to my friends, over and over again. And I think about the opportunities we've been given each day and feel peace and joy in my heart. So I guess this blog post is one last attempt to make sure I've said it enough: I am SO grateful to be where we are right now!!

I mean, we moved here not knowing what our whole futures would hold! We didn't know when Micah would get hired, which island he would get hired on, or if he even had a sure chance of getting hired! We flew over here with our kids, our luggage, and a big question mark hanging over our heads. Our "Flight of Faith" we called it.
We tried to make as many decisions as we could, which could influence the direction of our future, however, we didn't have complete control over the outcomes. It was scary at times. We started off by flying to the island we were hoping to get hired on, although it was very possible he could have been hired on another. We got familiar with the area we wanted to live in, although it was very possible we'd have to get situated somewhere else. We met some wonderful people when we got here and moved into their house, although we knew it was possible we'd have to move again.

When Micah got hired at the teaching job we wanted, it was one week after school started.(you know, right when we were giving up hope...) The school is 5 minutes away, on the island we wanted, in the area we wanted, near the house we wanted to stay in. It is still such a miracle to me that this happened to us!

And it's not like we're rolling around in riches over here like Uncle Scrooge McDuck, because Micah is a school teacher and I am a stay-at-home-mom!
We are extremely grateful because we have a roof over our heads, a healthy family, our own freedom and independence, food to eat, a steady income, and a beautiful place to call home. 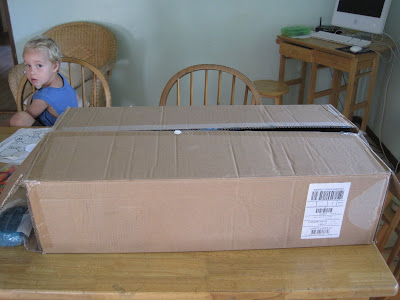 This might look like an ordinary box, but when opened up, it's an OCEANARIUM!
We have been working on this all week long! I woke up Monday morning thinking,"These kids need a new creative project to get their hands messy and their minds moving!!"
It's been fun for me to watch something unfold that the boys are proud of. As we've been exploring the beautiful and profound underwater reefs of Hawaii, the boys have been enthusiastic to talk and learn about all things sea creatures!
First, we went outside with paints, brushes, and imaginations! 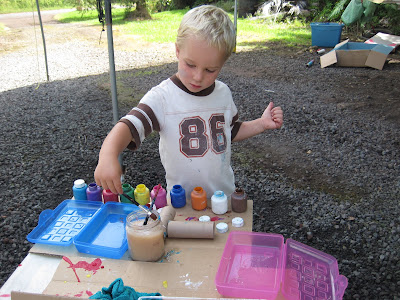 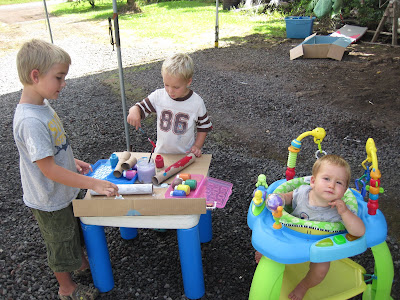 The first day we painted the box blue and let it dry overnight.
Over the following days we colored paper sea creatures, glued on eyes, and made our urchins. Tp and paper towel rolls became sea cucumbers, eels, and freshwater-underground springs (Hilo inspired). Marbles, and sea-shells became treasures of the deep! 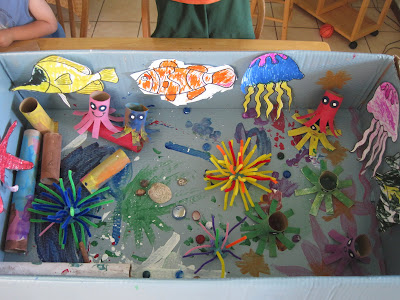 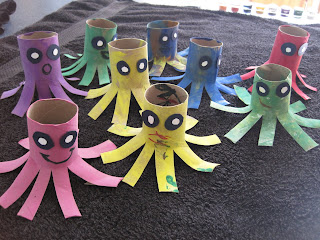 Sea Urchins or "Wana", as we call them here. I made a hard, salt dough, dyed blue, and the boys stuck pipe cleaners in them. This was a favorite, and easy for little boys with short attention spans. 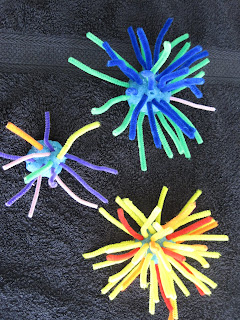 "Watch out! This one is poisonous," says Zadok. 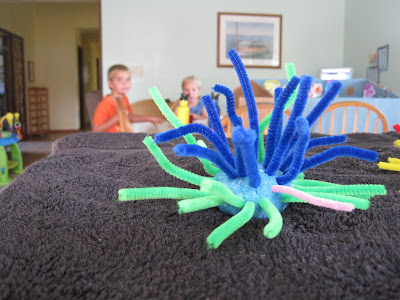 This was an inexpensive and fun project to keep the kids busy and actively learning about ocean life. Zadok asked me if next we could make a "Skyorama" for his paper dragon. :)

And the baby may participate....next time. 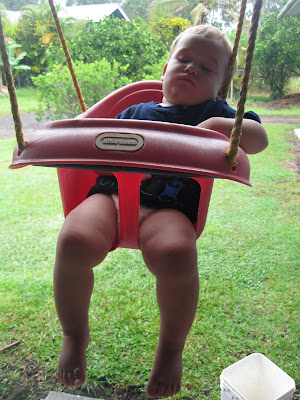 Back in the water

An afternoon surf session at Honoli'is. It was small and friendly, perfect for getting "back in the water."

Waiting for a wave: 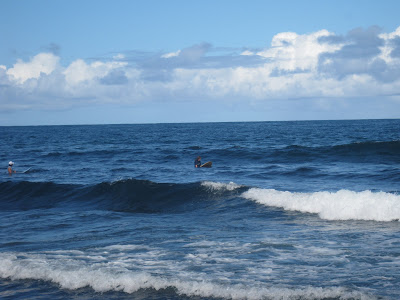 Paddling with a smile: 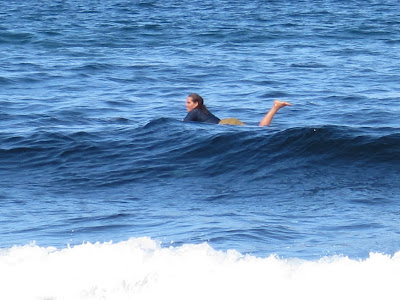 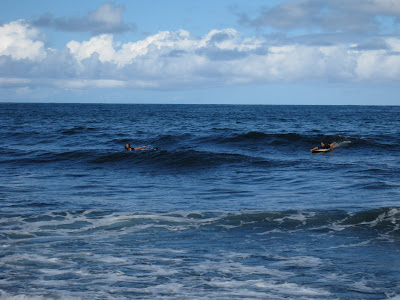 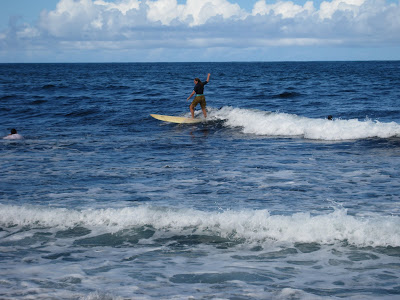 Thanks Micah for surprising me with these pictures! "Best Husband Reward!!"
Posted by Sally Jackson at 11:20 AM 1 comment:

Email ThisBlogThis!Share to TwitterShare to FacebookShare to Pinterest
Labels: Surfing

The other night as I was checking out from the grocery store I bought a chocolate candy bar. I wasn't even craving chocolate, but thought that since I had made it all the way to the grocery store without any kids in tow, I should treat myself to something tasty. So I impulsively purchased a Snickers with Almonds and ate it on the way home and (hid the wrapper). However, I didn't enjoy the candy bar one bit. It was overly artificially sweetened, tasteless, and disappointing. I wish I would've waited for a time when I really wanted chocolate and could've bought something fantastic, like Ferrero Rochers. In this case, my impulsiveness didn't pay off.

Then today I was remembering this time that I went to a hotel party in San Diego with some of my girlfriends, when I was in my early twenties.
The tiny hotel room was packed with mingling singles, all talking, laughing, and checking each other out. You know, a typical singles party.

So there's this guy at the party standing across from me who I didn't like the moment I set eyes on him. He was loud, arrogant, obnoxious, and hitting on every girl in the room. As the night wore on, my irritation increased. It kind of bugged me that I was letting this guy irritate me so much, but I think he just represented everything cheap and annoying about a lot of the guys I'd been meeting lately, and I was sick of it. There he stood in his expensive clothes, strong cologne, cheesy pick up lines, and spikey hair. Get real.

I was standing in a semi-circle with some of my girlfriends drinking a large glass of something bright orange, maybe some Tropical fruit punch or soda. This guy was now standing about 6 feet in front of me where I could now smell his smelly perfume and hear his un-funny jokes. I remember he was wearing a white T-shirt and thinking he was one of those guys that probably paid 50 bucks for a white t-shirt.

Then something weird happened; something I've never been able to explain.
Somebody must've accidentally bumped the light switch because suddenly the lights turned off in that tiny hotel room. And for 2 seconds it was pitch black.

And during those 2 seconds of darkness, my bright orange fruit drink impulsively flung across the room right into the middle of that guys white t-shirt.

When the lights turned on, the room turned silent, except for angry words that came fuming out from his mouth, "Who the Effing who, threw this drink at me? Who?"

"WHO?" he screamed again. "Whoever threw this drink at me is going to get their ass kicked!!!" he screamed louder.

The room turned into a commotion as everyone started asking around, looking for the culprit who dared to throw their drink at him.
I joined right in, looking just as concerned as everyone else, wondering out loud, "Who would do such a thing?"

But nobody would fess up, and nobody would say who it was, because nobody ever knew that it was me; the girl standing there with an empty cup in her hand, and a smirk on her face. Nobody even looked my way!

The guy ended up being so angry that he left the party. I remember him storming out of there mumbling something about expensive shirt, lame friends, outta here.....

As the door shut behind him I heard a bunch of people say,"Good, he deserved it."

And that was a time where it really paid to be impulsive.
Posted by Sally Jackson at 6:27 PM 4 comments: