Odin loves picking fruit. He cracks me up on a daily basis because every day he tries so hard to convince me that there is ripe fruit to pick, even when there isn't.

"Mooooom, I see some ripe tangerines out the window."

"No Odin, those are still green, and not ripe, yet."

"Nope, they are riiiiiipe, I see some orangey on there."

"No Odin, they are still green, and are not ripe, and we don't want to pick fruit til they're ripe because they won't taste sweet."

So we end up going outside and picking whatever we can find that's ripe. There's always guavas to pick. I let him pick as many avocados as he wanted the other day and he went nuts-- Like a kid in a candy store, until he decided that the Starfruits were ripe, which they weren't yet, so we started all over again. "Mooooooooom....."

Such a funny kid! Here's a picture of Odin in the garden, staring longingly at some ripe green beans that were ready to be picked. Oh happy day for Odin!!: 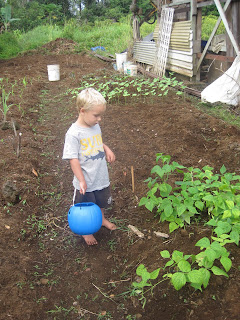 Posted by Sally Jackson at 8:23 AM