Several months ago I had some of our old home-movies transferred onto DVD. Among the stacks of VHS was a movie my Uncle George Stokes recorded while on his mission in Hawaii in 1957. It starts out with him standing in old-town Honolulu, wearing a suit and a hat, standing in front of Diamond Head. This was before the large hotels, before the loads of tourists, back when life in Hawaii was still quiet and simple. He takes the video camera around with him for the next 2 years, capturing bits of Hawaii as it was before.
What I love most about this video is the images of the church members at that time. It shows several baptisms in the ocean, and members socializing outside church chapels, next to their 1950's cars, with their 1950's hair-do's. There are many shots of children running around and laughing, and people standing in places unfamiliar to our times, such as Laie before it was very developed. There is one shot of Laie, where it is mostly all coconut trees! It shows the Laie Temple before it was landscaped, plain and simple. It shows gatherings of missionaries, playing the ukulele and smiling. One of my favorite scenes is a baptism on Maui, where after a Hawaiian man is baptized, he swims joyously around in circles, with a huge smile on his face! At the end of the video there is a hula performance, some fire-knife dancing, and a visit from President David O. McKay, who has come to dedicate the Church College of Hawaii, which is now Brigham Young University Hawaii.

I have always loved this video, for so many reasons. It reminds me of the unique history of the Latter-Day Saints here in Hawaii, as well as the beauty that has come from combining the truth of the restored gospel with the Hawaiian culture. It also reminds me of how my family ended up here, because of the mission of my father in 1967. I have grown to love and cherish these islands, and love being a part of this rich, cultural and gospel history. 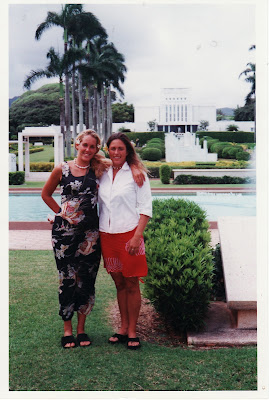 Me and my best buddy Shannon in front of the Laie Temple, 2001

After viewing this video, I felt inspired to share it with the youth in our church, somehow. After thinking about it for several days, I came up with the idea for a
"LDS Hawaii Heritage" night.
I wanted our youth to be able to look back in time and see how their lives (weather they are from Hawaii originally or not) are woven into the history of Hawaii and the gospel, through being members of the church. I wanted them to feel the spirit of those who came before them, who led the way for them to be followers of Christ, and know how their past has affected their future, in these latter-days. I wanted them to walk away having a stronger foundation of who they are, and what they stand for, because of their gospel and cultural history.

The "LDS Hawaii Heritage Night" was this past Wednesday night, and it turned out really great! I am so glad I did this! We had a group of about 25 Young men and women come. I started by sharing a large time-line I made, to showcase the dates in history of most significance. I wanted them to have a visualization of their history up to 2012. I started with our Latter-Day history beginning in 1820, just 192 years ago, when Joseph Smith knelt down to pray, and received the first vision. The time-line ended in 2012, where we are today in Waikahe Ward, Hilo Stake, on the Big island, Hawaii.

Here's some of the significant events on the time-line that have led us to where we are today:
(**Resources for this time-line include the book "Moramona, The Mormons in Hawaii" by R. Lanier Britsch, Wikipedia, and LDS.org which I have hyperlinked, The Book of Mormon, and my own knowledge.)

1820:Joseph Smith, a young farm boy living in Manchester, New York seeks guidance from the Holy Bible on which is the right path to follow, or which is the right church to join. He is reminded in James 1:5, to pray and ask in faith, and he would receive answers. He went to a grove of trees to pray and was visited by two personages, which he knew as Heavenly Father and Jesus Christ. They told him not to join any of the churches of this day, for they were all missing key pieces of the true gospel of Christ. This was the beginning of a new church that would be formed, an everlasting gospel for the Latter-days.
By 1830-The Book of Mormon has come forth through an angel, translated from ancient script by Joseph Smith, been published, and the Church of Jesus Christ of Latter Day Saints is officially organized.... aka the Mormons.
1844-The Prophet Joseph Smith is shot and killed in Missouri, by people who hate and despise the church. The Latter-Day Saints are persecuted and seek refuge in the West.
1847-A new prophet is called, Brigham Young, who leads the Saints to Utah where they are able to settle in peace, free from religious persecution.
1850- Brigham Young sends ten missionaries to Hawaii, which at the time is called "The Sandwhich Isles Mission."
December 1850-The first LDS missionaries arrive in Honolulu, Hawaii. One of the more faithful and determined missionaries, George Q. Cannon, begins to learn the Hawaiian language after 2 days, and can communicate effectively with the native Hawaiian people after 3 weeks.
February 1851-The first Hawaiian is baptized into the LDS church, a 16 year old boy.
by 1854-The Book of Mormon has been translated and then published into the Hawaiian language, with the help of Jonatana H. Napela, a Hawaiian man that was converted to the gospel on Maui. Many Hawaiians are converted to the message of the gospel after reading the Book of Mormon.
1854-1865-The missionary efforts continued to move forth, although there were many setbacks and struggles along the way. At one point the Saints decided to build up a settlement on the island of Lanai. This plan wasn't successful due to many problems with failed crops, isolation, and disease, which wiped out many of the members at that time. At one point Brigham Young ordered all the missionaries to come back home to the mainland, which halted the work in Hawaii. The newly baptized Saints were left alone, with very little guidance on how to perform ordinances or carry out correct doctrinal instruction. There were even some haters who tried to destroy what was already accomplished.
1865-Missionaries had come back and purchased the Laie plantation, a 6,000 acre area on the North shore of Hawaii. This was to be the next place the Saints would try to settle, building schools, churches, and a community of Christian Saints.
Stakes, wards, and missionaries are spread out over all the islands, as the church members begin to grow in large numbers.
1919-The Laie Hawaii Temple opens to the people of Polynesia, a place of refuge and worship for the Saints of the pacific. Hawaiian families from outer islands and Polynesian families from all over the Pacific, save up to come to Hawaii, to be sealed together as eternal families forever.
1957-Here we stopped and watched the video of my uncles mission. The footage was originally 26 minutes long, but I edited it down to 15 minutes. To be honest, I was really worried the youth would get bored after 5 minutes because of the slow nature of the video, but I was so wrong! They loved it, they were totally immersed in it, and I knew they felt the spirit of the message I was trying to send.
1963-The Polynesian Cultural Center opens in Laie, which becomes a pathway to exposing millions of tourists to the gospel each year!
1967-I talk briefly about my Dad's mission, and how our family ended up in Hawaii. I talked about my great, great, great, great, great Grandmother Lydia Downer Gates, who was baptized in the 1820's after reading the Book of Mormon, a really amazing story you can read more about here: Lydia Downer gates (1810-1896)

I stopped again here and had a sister from our ward, Celeste Ha'o, get up and speak for about 15 minutes about the impact the church has had on her family, as descendants of Hawaiian ancestry.
Celeste's families' roots go way back to before Captain James Cook landed here, before Hawaii was developed into a Western culture, back to ancient times, when her families religious values and belief systems were based on natural mythology, and folk tales.
She got up and bore a beautiful testimony of how the restoration of the gospel, and the knowledge of our Savior Jesus Christ changed her families lives. She told about the conversion of her great grandmother, and how because of her grandmother's belief in the gospel, it allowed her family and their ancestors to be sealed together forever in the Temple for eternity.
Lastly, I had the youth come and write their names on the time-line at the year in which they were born. I felt that this allowed them to see how important they are, as history continues to grow. They are now a part of a ward, and members of a church, that has the ability and influence to bless the lives of their families and friends for good. They are part of a beautiful combination of gospel and cultural history, that they can cherish and pass on for the eternities. I encouraged them to go home and find out more about their ancestral ties to the church, or if they are the first ones to be baptized in their families, to go home and write down their histories, starting now. Someday their great, great, great, great grandchildren may want to read all about it, thus strengthening their own testimonies.

I was really glad I did this, as it was a very positive experience for me. The way the Polynesian Saints have grasped the truth of this knowledge and continue to live it with love and faith, is inspiring to me. I am not Hawaiian, but I grew up in Hawaii, so I don't often feel connected to any one group of people or ancestry. My ancestors are originally from Europe, a place I have never even been. It's hard for me to visualize where I actually, historically, came from. But after exploring the history of Hawaii's gospel ancestry, I feel a deep connection with my LDS family history. I feel like the people in my church are my family, because we share the same history, the same beliefs and values, and the same future in mind. I don't feel very burdened to live far away from my family, because I have this gospel family here who supports who I am.

Laie on Dwellable
Posted by Sally Jackson at 7:26 AM

The history of Hawaii is so much more interesting to me now that I've been there. Thanks for sharing this.

Your welcome! I LOVED doing this! I am laughing, though, because I always end up editing more after I publish something and your comment popped up before I was done editing! I wasn't done yet! Ignore my grammatical errors. :)

Hi Sally!
My name is Jane and I'm with Dwellable.
I was looking for blog posts about Laie to share on our site and I came across your post...If you're open to it, drop me a line at Jane (at) Dwellable (.com)
Hope to hear from you :)
Jane