I'm sure there are a million variations out there on how to make yogurt, but this is the one I like best. I started making yogurt from following my friend Hilary's recipe, several years ago, but have modified it to my liking. It makes 4 quarts of vanilla yogurt.

Ingredients you'll need:
1 gallon of milk: whole, 1%, 2% or cow's or goat's milk. (the higher the fat content, the creamier the yogurt)
6-8 oz natural plain or vanilla yogurt with active cultures, (once you have made your own, you can use that as the starter)
1 Cup honey OR 1 and a 1/2 cups white sugar
2 Tablespoons Vanilla Flavoring
1/3 Cup powdered milk (makes it thicker)

Directions:
Poor liquid milk into Crock-pot and cook until temp reaches 180 degrees F.
*This is the sterilization process to make sure there are no harmful bacterias growing in the milk. If you purchased your milk from the store it has probably already been pasteurized, however, it's better to be safe and sterilize it again before you start the culturization process. (I've also heard that this extra step of sterilization helps to thicken the yogurt further.) 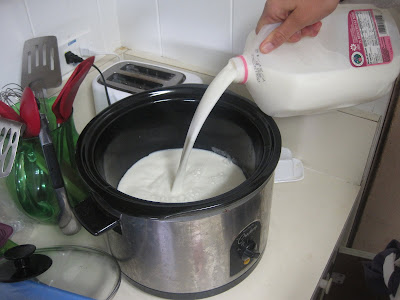 Check temperature with a cooking thermometer, and turn it off at around 180 degrees Fahrenheit. Unplug the Crock-pot, take off the cover, and let the milk start cooling down. Remove layer of film with a spoon.
At this point you can whisk in your sweetener of choice, powdered  milk and vanilla flavoring, but not the starter.

Periodically check the milk over the next few hours with the thermometer. When the temperature of the milk has dropped to 115-120 degrees F, whisk in your starter yogurt. I like to add the yogurt at 120 F because the cold yogurt always makes the temp drop a few degrees. You don't want the temp to drop below 112 where your culture won't grow at all. 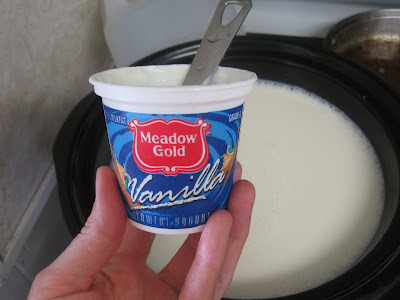 As soon as the milk and yogurt have been thoroughly mixed, immediately use a ladle or spouted cup to scoop the milk into the 4 clean, quart jars. This is where a funnel comes in handy. 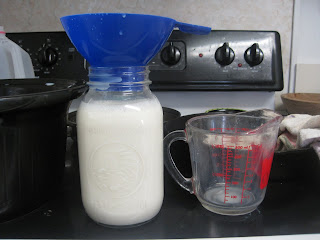 Place jars into the cooler and cover up to the lids, with hot tap water. I let my tap water run as hot as it can go, until it measures about 120 degrees F. (any hotter and it will kill your active cultures, any lower than 112 and your active cultures won't grow, so beware) 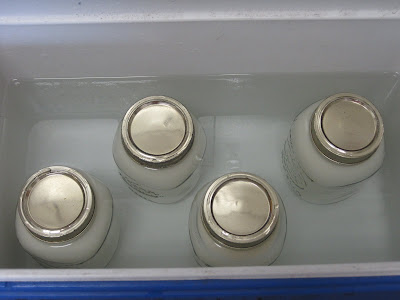 Close the lid of the cooler, then place it in a spot where it can go undisturbed for 8 hours. Cover the cooler with towels or blankets to help keep it insulated. Now go about your busy life while your milk solidifies into yogurt. *You must resist checking on your yogurt babies. If you open the lid your precious heat will escape and your cultures will die!
After 8 hours, take jars out of cooler and dry them off.  The liquid inside should have a jelly-like jiggle to it.
If you want to add fresh fruit or other flavors now would be the time. 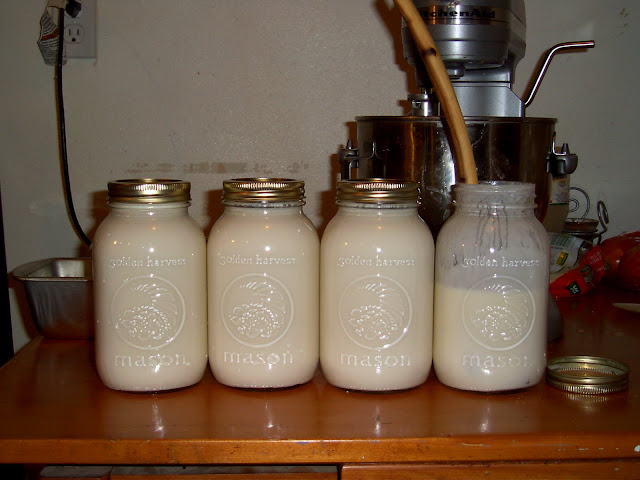 You should now have some delicious vanilla yogurt!