You know how businesses will put the restroom key on a giant, awkward key-chain, so the customers won't accidentally take it home? Well, this customer took it home! 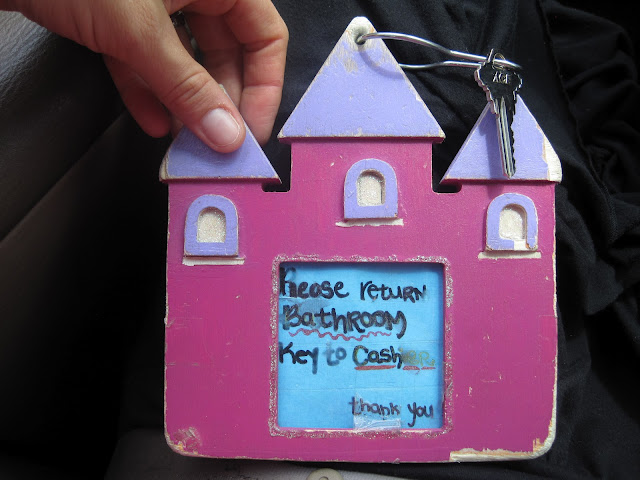 I felt pretty bad about it when I realized it was still in my purse from the craft store we'd visited earlier that day. I had stuck it in my purse so I could help the kids use the toilets, then forgot it was in there.  I took it home on Friday, then figured I would mosey on over there after the weekend to return it, no harm done. "They must have a spare", I considered, "Who wouldn't have a spare key to the bathroom? They probably have at least ten of them!"
Monday rolled round and we finally drove over to the craft store to return the restroom key. Before heading in, though, the kids dragged me into the pet store to look at fish. The pet store was right next store to the craft store, so I figured a few more minutes wouldn't hurt before we returned the key.
While we were in the pet store a woman hurried in and asked the pet store owners if she could please use their private restroom. I overheard her saying,"Someone took the key to the toilets at the craft store, and no ones been able to use the public bathrooms all weekend! It's been awful."

I hurried my boys out of there as fast as I could. We rushed into the craft store and headed straight for the front cashier, eager to return the key and redeem myself from what I'd done! We had almost reached our goal when I heard one of the boys yell out, "Mom, I have go shi-shi."
Perfect! I have a bathroom key!
We discreetly let ourselves into the back restrooms,  the boys quietly finished up, then we finally returned the key, like I'd first intended.
The cashier took it from my hand and smiled real big. "You found the key!" she said excitedly, "Where was it hiding?"
"At my house," I said, smiling back.
"Oh." she said, not smiling back.

We hurried out of there real fast, and went straight to Coconut Island......mostly because I realized I had to use the restroom and was too ashamed to ask for the key.

Email ThisBlogThis!Share to TwitterShare to FacebookShare to Pinterest
Labels: Silly