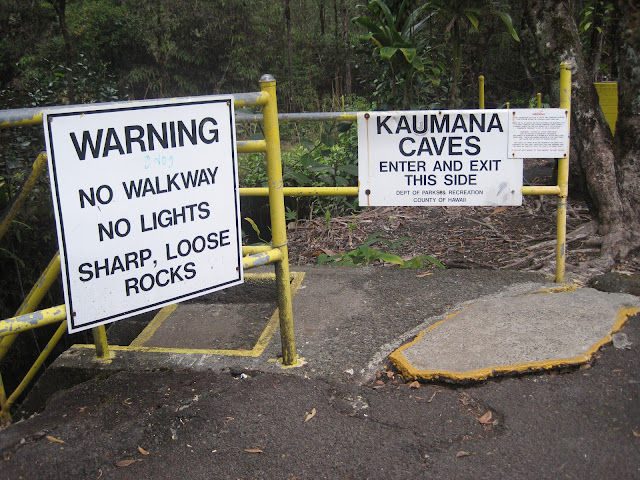 Micah and I have been trying to get out on dates more. We've found from experience that the perfect babysitters are the trusted friends with young children who also need date nights. So now that we've found some of those, we are able to take turns watching each other's kids instead of wishing we were on a date. It's an awesome deal!
So, last month some friends came over to watch our boys while we went out on a date. We like to do outdoorsy, nature dates, but weren't in the mood for swimming or hiking.  Then we remembered there were some lava caves we wanted to check out called Kaumana Caves.  These caves were formed from ancient lava flows that hardened into tubes, large enough to walk through. All you need is flashlights and an adventurous spirit, and you're in.
I'll admit, I was very nervous at first! My heart was beating terribly  fast, and I found myself holding tightly onto Micah's arm. The entrance to the caves is actually where the lava tube had once collapsed. Someone built stairs going down into the collapsed area, with a choice to go right or go left; the right side being a variation of small crawl spaces and large rooms, and the left cave being one, long walking tunnel. We chose to go right first, where we had to crawl through some smaller tunnels (which made me a little anxious), but then it would suddenly open up into a cathedral sized room, and I'd feel better again.  I was also completely blown away by how amazing it was! Phenomenal stuff!
We saw some radical lava formations deep in there. The brownish color is from mineral deposits that have changed the color of the black lava rock over time. This one looks like a min lava-fall. 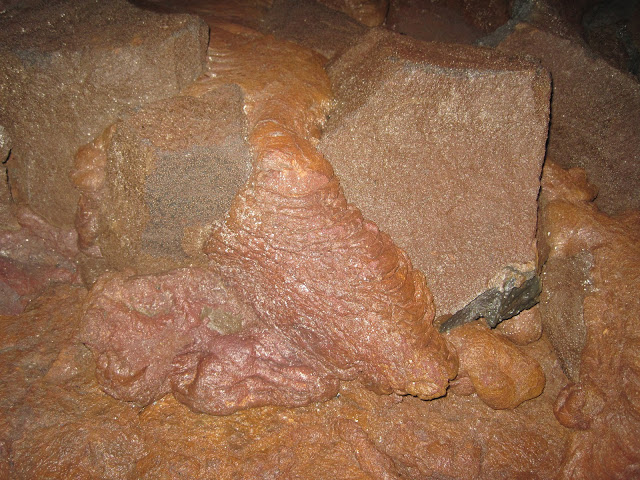 This photo below is where the tunnel starts to shrink a little. We had to get down low so our heads didn't hit the ceiling. I like the natural stairs on the right. Very cool.

After walking for about 10 minutes to the right, we stopped and turned off our lights completely. We couldn't see our fingers in front of our faces! We took a picture during our pitch-black experience and found the flash to be illuminating! Our friend on facebook saw this photo and remarked that a tiny-Hawaiian-black bat made it's shadow on Micah's shirt.  Can you see it? (Not really, it's a water mark, but I thought it was a clever find.) 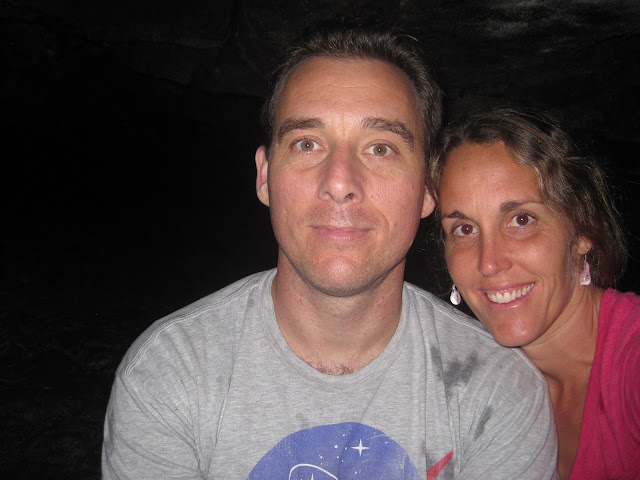 We had an awesome time spelunking, as they call it! In fact, we had so much fun, that we scheduled a tour to climb down into some of the longest and biggest lava tubes in the world, located here on the Big Island. Stay tuned for some more caving-adventure-posts in the near future from Kazamura Caves!

Posted by Sally Jackson at 6:22 PM

you are so brave! Cave's terrify me:)