Nu a' kea, Goddess of Lactation

In ancient Hawai'i there was a traditional weaning ritual called ukuhi (meaning weaning), which would take away the child's desire to have milk. When the child started to show signs of readiness to wean from the mother, which varied vastly from age to age, the ritual would be performed to determine if it was time to stop breastfeeding.

The ukuhi started with pule, or prayer.  A family minister, or kahuna, would then sit facing the mother and the baby. He would take 2 stones to represent the mother's breasts and place them within the baby's reach. If the child grasped the stones and threw them away, the ritual was successful and the baby was ready for weaning.
If the baby did nothing, then the ritual was discontinued and postponed for another time.
Another prayer was then offered where the kahuna asked, "Do you (naming the child) wish the desire for milk to go away from you?"
The mother would then answer as if she were the child and say, "Yes."
The kahuna then responded, "And never more will you desire milk?"
"Never," answered the mother.

And that was the end of that. The child was now weaned.

From the historical accounts of the ancient Hawaiian peoples, it was clear that breastfeeding was a very sacred practice. The Goddess of Lactation, or Nu'a kea, was a sacred title given to those who could give waiu (breastmilk) to their infants. Often wet-nurses were called in to breastfeed the babies of royalty who had problems giving milk, (what problems we don't know for sure), but we do know that these wet-nurses were held in the highest esteem and their breasts were considered sacred and kapu (off limits) to others. The wet nurses were also considered special companions to the infants because of the close symbiotic relationship they had with each child that they breastfed--a relationship that would continue long after the child had grown up. This companionship had a special name, hoa 'ai wai, or "companions at the breast."

This information is from a chapter in the book, "Emma: Hawai'is Remarkable Queen" by George S. Kanahele. The chapter is called Ulu Ke Keiki, or The Child Grows, and talks about some of the ancient Hawaiian practices in raising children. I thought the section on breastfeeding was intriguing and beautiful. I always feel inspired when a culture upholds and honors breastfeeding in this way--calling it sacred and referring to women as Goddesses. How much more lovely can you get?

I've also been thinking about this a lot lately because of the special companionship I have with my three year and a half year old nursling. He has been feeding at the breast since the day he was born and still loves his milk-milk time with Mom. Some days I am extra tired, busy, or feeling morning sickness, and feel ready to wean him completely, ready for him to move forward. Other days I look into his little eyes and can't imagine denying him one of his favorite forms of love and comfort. I'm pretty certain that if we performed a weaning ritual right now those stones would be thrown across the room one second, and the next second he'd be asking for his favorite mommy milk.
It's not as easy as it sounds, as we know. For those that practice child-led weaning we have seen that the emotional and sensory bonding that exists between mother and child is more powerful than any arbitrary time frame or social expectation.
And although my three year old is at a highly distractable age, and only nurses at bedtime and in the mornings, I'm pretty certain he's not ready to wean anytime soon.

So, I will continue to be his Nu' a kea, and he will be my little waiu-drinking-keiki, and we will be two, happy hoa ai' wai, until something changes.
(Mahalo nui Hawaiian culture for putting our special relationship into perspective for me.
I'm feeling pretty regal right now.)

Here's Jonah below with his other two forms of love and comfort: his pet kitties. 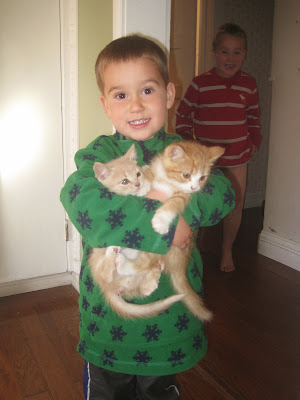 Posted by Sally Jackson at 2:10 PM

Email ThisBlogThis!Share to TwitterShare to FacebookShare to Pinterest
Labels: breastfeeding

Beautiful! It will be interesting to see how the breastfeeding relationship evolves as your pregnancy continues! When I was about halfway along with Charity, my milk supply dropped significantly and the twins would say, "milk all gone?" and I'd shrug and say yes, sorry! And they'd nurse anyway...but lost interest pretty quick. And then we moved and they were done for good at nearly 3 yrs old. It was bittersweet. I hope whatever weaning Jonah has is a peaceful one for you and him!

Thank you Chelsea. It's fun to hear other people's weaning stories. I imagine Jonah won't want his milk-milk very much if it's all gone. lol We shall see about that, though, he's pretty attached to snuggling. And congrats again on a new baby! So exciting!