The first concert I ever attended was Pearl Jam in 1992. They were playing at the University of Hawaii amphitheater out in Makiki on the other side of the island. I was 13 years old. I wore a white bodysuit that snapped at the crotch, cut off jean shorts, and knee high, white nylon socks. My sun-streaked-beach-hair was long and unkempt as usual.  Us Hawaii kids didn't exactly fit the Seattle grunge scene stereotype, but we could appreciate good music when it came to town. I had been listening to Pearl Jam for months on my cassette headphones, and couldn't believe I would actually get to see them in person!

My mom drove 4 of my friends and I out there in our big Dodge van, dropping us off in the parking lot,  and promising to pick us up after it was over. The butterflies in my stomach were intense in the days leading up to  the show. I remember feeling so exhilarated yet so anxious about getting to see one of my favorite bands ever, live! When the night finally came to see the show, they didn't disappoint, either.

The music was loud, filling every crevice of my body with adrenaline and excitement. I remember staring in awe as Eddie Vedder climbed to the top of the concert scaffolding, screaming passionately into the microphone, the words to "Jeremy", one of the hit songs from the 1991 album TEN.
My friends and I tried to get as close to the front as possible, pushing through the crowds of dancing, moshing teenage boys. It was hard to push through, and we never made it to the front of the stage. However, several times we'd tap some big, strong G.I. Joe on the back and ask for a lift on their shoulders. I remember rocking to the beat of the music, screaming my lungs out while sitting on the shoulders of some huge, sweaty, army guy.

This first concert was life-changing for so many reasons. It not only opened my heart to the joy and thrill of seeing live music, but It opened up a world of new possibilities for living on a small island with limited resources. What I soon found out, as I was entering the age of teenage autonomy, was that Honolulu was the favorite touring stop for all my favorite bands, and therefore I could save up my babysitting money, buy tickets, and attend all the concerts I wanted! It was a miraculous breakthrough for my young, tweenage self.
My friends and I became quite obsessed after that with keeping up on all the latest show announcements. When Bad Religion came to town, we crammed into the car with my big brother and his friends. When Dance Hall Crashers hit the scene, we took THE BUS, later hitching a ride home with my friends auntie and uncle. I remember the uncle driving us home late that night while we were curled up in the back of his pickup truck. The bright Hawaii stars shone down on us 3 adrenaline-psyched girls, while ska music still danced magically in our heads.

From 1992 to 2000 I attended more concerts than I can count. I was trying to remember all of them the other day when I stumbled upon a stack of old tickets. I can't believe I kept all these! This is probably only about half of them, as I can remember far more, but here's a few stubs I am happy that I held onto: 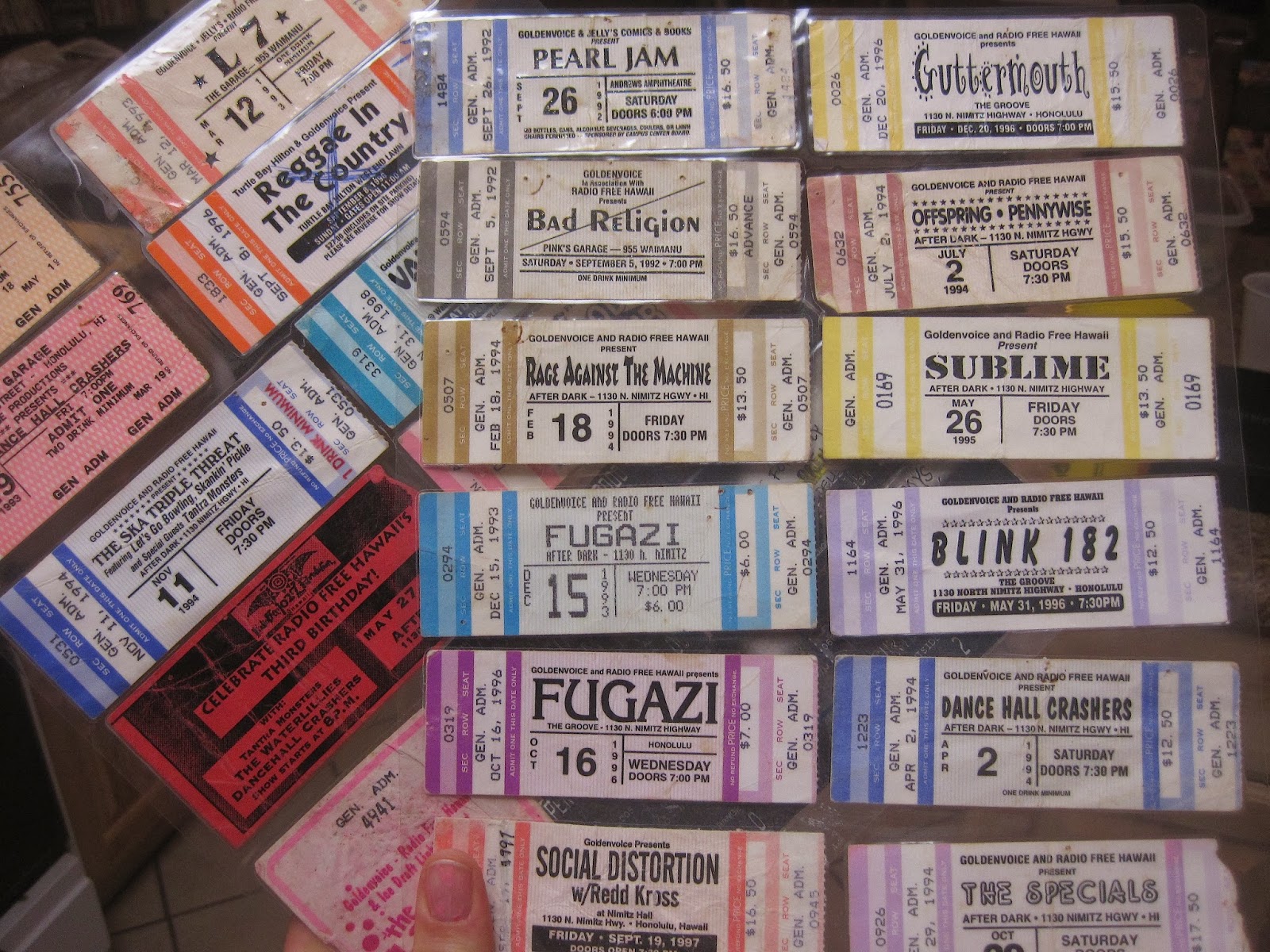 One of my favorite things about these shows is that most of them were at very small venues. Living on an isolated island most concerts just weren't going to attract a big enough crowd for a large, concert hall. So, most bands played in small nightclubs or empty warehouses. I saw Bad Religion every year they came to town. I must've seen them at least 5 times, each time a small and intimate venue in some downtown nightclub.
Other shows were even free or they ended up playing at a friends house for fun. Ben Harper played for free for a small audience in 1995 at the After Dark Club. I saw Sublime play at a house party on the North Shore for my cousins birthday. This was just shortly before the lead singer died in 1996.
Every year starting in 1993 a big, outdoor music festival would come to town, called The Big Mele. Five or six bands would play on several large stages:  Bands like Violent Femmes, Tool, Fishbone, Primus,Porno for Pyros, Blind Melon, Down by Law, Face to Face, No Doubt, Cypress Hill, The Mighty Bosstones, Blink 182, NOFX, Vandals,  Big Fish, Guttermouth, Pennywise, Rancid, and 311, to name a few.
One year my friend Jenna and I suddenly and magically got VIP passes backstage right before Rancid started playing. I remember getting to meet the lead singer, Tim Armstrong, and immediately noticing that he had a big, white pimple on his face. I was really excited to meet him, plus hear his music, but all I can remember is wishing he would pop his zit before he went on stage.

Of course Hawaii brought countless reggae shows, as well. I've seen Ziggy and everyone else in the Marley Family a few times over (except for Bob, of course). My favorite reggae shows were always in the middle of the day, outside in the beautiful sunshine.  I grew up with a Mom who loved dancing and singing to UB40 and Bob Marley, so attending reggae shows always felt the most natural to me. I still love reggae music more than anything else. It's my go-to relaxation and happy music.

When I was seventeen I branched out a bit with my bestie friend Crystal and saw some of the bigger names like Michael Jackson and Prince (the artist formerly known as). They played crowded, sold-out shows at Aloha Stadium. In 1998 my mom and I attended a Sheryl Crow concert at the UH ampitheatre, which was also one of my first big-name, sit-down and-watch-concerts. Later in 1999 I saw the Rolling Stones. These concerts were super fun, but mostly because I knew all their songs from all the hours of watching MTV music videos. (Do they still have those??)
To this day, however, my most favorite and memorable concerts were the small punk, ska, and reggae shows we saw at downtown nightclubs. I have irreplaceable, happy memories of dancing my heart out to the grooves of Dance Hall Crashers, Skankin Pickle, and Deee- Lite, in the intimate settings of downtown Waikiki and Honolulu clubs. 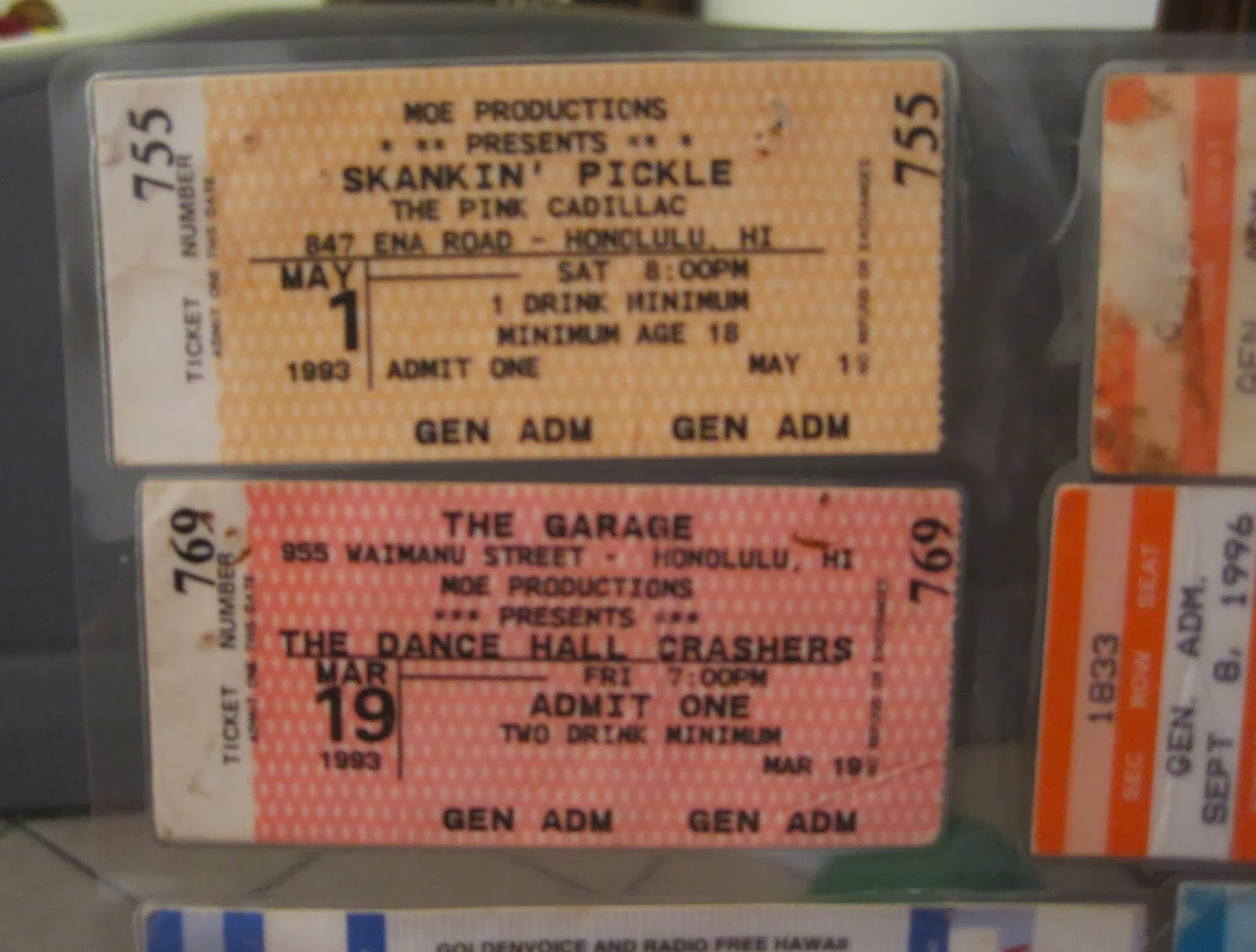 Even many of the local bands were really fun to watch, like Go Jimmy Go, Natural Vibrations, and Upstanding Youth.
I believe Hawaii has a special knack for creating talented people. Many successful musicians were born and raised on those soils. Jack Johnson appeared on the music scene in 2001 with his first album, Brushfire Fairytales. Before that I knew him as the cute, soft-spoken surfer boy who lived down then street at Pipeline. Him and his band played a free show at Haleiwa Joe's restaurant in 2002 for local residents of the North Shore, but that was the end of that. Now he plays for crowded, sold out audiences around the world.

The exposure I had to a variety of music no doubt shaped my appreciation and love for music as well as provided an outlet for growing and learning about life. I can't imagine my life growing up on Oahu without the positive influence and energy of live bands, and the powerful influence they had in shaping my happiness.
I am also extremely proud of my friends who went on to form their own bands, or have become adept at musical instruments. (Crystal rocks on the guitar and vocals, and The Psychotic Perverts can play to impress-- Jenna, Mia, Nano, you guys rock.)
Here's a few life lessons I learned from attending concerts in Hawaii:
*Dancing at concerts is a must. Sitting down is regrettable.
*That Tim Armstrong sounds just as good with a freaky zit on his face.
*That sneaking into shows is heart-pumping-fun, but not fair to the musicians who've worked so hard to produce the music. (Only did that twice when I was out of mula)
*That you should not wear a spaghetti-strap-tank-top to a Social Distortion concert. The strings will get ripped right off while you are getting beach-balled through the air by crowds of men.
*Farting is not acceptable in a small, hot, venue, while your surrounded by sweaty people.
*That you don't need the influence of drugs and alcohol to feel the adrenaline rush of good music. It fills your soul with goodness immeasurable.
*If you get backstage passes, it's actually not that cool. Watching the back of people's heads sing is not as fun as watching their fronts.
*You will get dirty, muddy, and worn out from a long day at the Big Mele. Do it again every year.
*Don't be a band-groupie. They're annoying.
*If you ask 20 people at a show for a dollar, you can afford to buy a band T-shirt.
*Enter the mosh pits at your own risk.
*If you run into Zack de la Rocha at Foodland, don't get all starry eyed and freak out because you'll see his white ass at the beach the next day and realize he's only mortal.
*It is a privilege to have your mother drive you to concerts. Remember to thank her later on for all the driving and waiting she had to do before you got your driver's license.
*Tip the bathroom attendant lady generously at the clubs. She puts up with a lot of drunken idiots.
*"One good thing about music, when it hits you, you feel no pain," are true-life-meaningful- lyrics.
*Stopping at the Wahiawa Jack in the Box on the way home for fast food and soda is a must. But watch out for aggressive transvestites looking for drugs and sex.
*Save your concert stubs. Someday when your 35 and in the throws of raising little ones, and motherhood, you will want to remember all the fun times you had in your youth (and will have again)!

So, the last few times I saw a live show were the free outdoor music festivals we have here in Cedar City and the last concert I attended: Mason Jennings in 2006, 36 weeks pregnant with my eldest son, Los Angeles, CA: 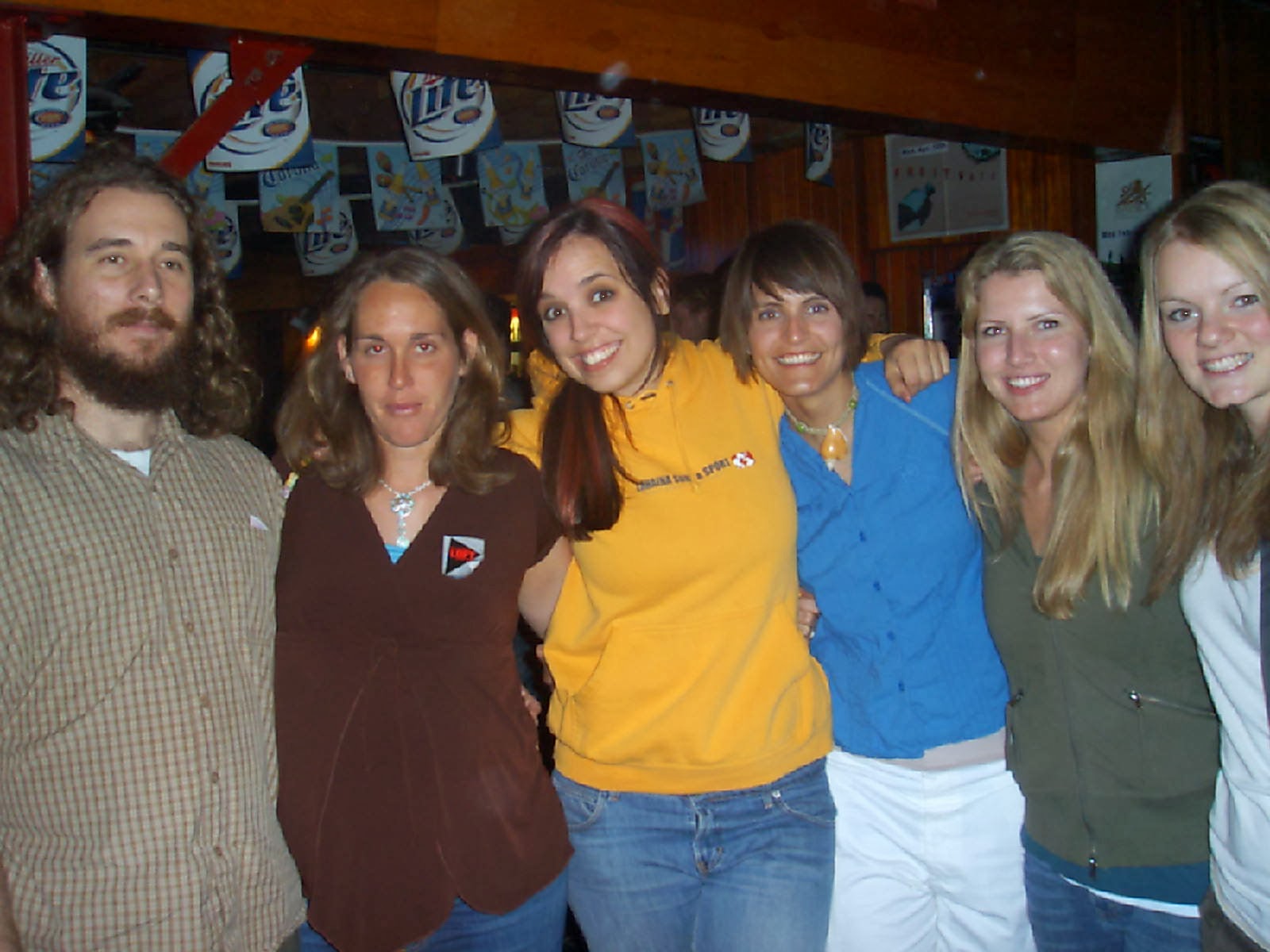 I need a night on the town!
Posted by Sally Jackson at 6:32 AM

Sally Jackson
I'm originally an Island girl who moved to Utah to raise our 4 wild and wonderful boys with my awesome husband of 13 years. I love reading, writing, crafting, serving in my church, and being outside.