How Babies are Made and other Sex Ed. talk

We just recently had our puppies neutered (9 months old) and along with the procedure came lots of questions from three boys (8, 6, and 3 years old) about how babies are made! I realized that it was time to explain the birds and the bees once again, just to touch up on the basics.
I was also motivated to talk about it again when I got out of the shower the other day and my toddler tells me,"Mom, you have a weird-looking penis."

We have an open policy about sex education in our home, meaning we believe that talking about sex, teaching our kids about sex, and answering any questions they might have about it, is the most natural way to teach them how to understand the world around them. It isn't awkward or uncomfortable, it's normal. I want them to know that sex is a natural part of life, and is happening all around us, and not just between humans, but between plants and animals, too! I also want them to know that it is very sacred, and when you share it with the right person, in a loving, marital relationship, it is one of the best things in the world!

I picked up this vintage children's book (1968) several years ago at a thrift store for 50 cents: 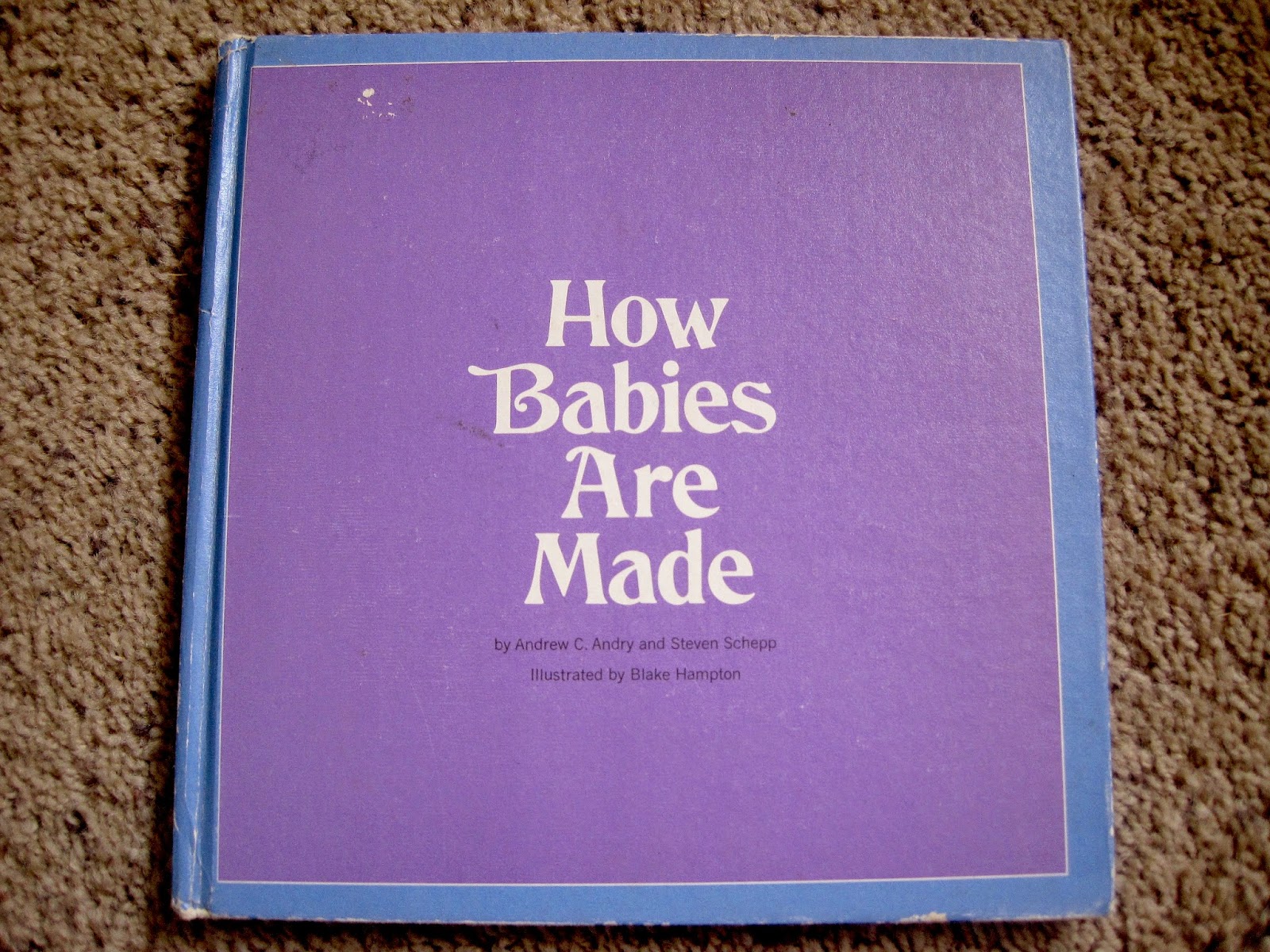 It was a treasure of all treasures to behold! I love the illustrations, and the cute, simple explanations of how plant seeds, animal babies, and humans are made. I've read and discussed it with our children many a time, and each time it brings up more questions.
I think one of my favorite discussions EVER, was when our eldest son realized that if sperm and egg had to come together to make a baby, then that meant that Micah and I had to (GASP!) do that with each other!
"You mean you guys had to do that four times to get four kids??" he asked, with utmost disgust and concern.
"Yep! I answered. "At least that many times."
"Ewww!" he responded. "That is so gross!"
"Well, your not going to think so someday," I reminded him. "In fact, you might even want to do it more than four times."
No response. Meanwhile, I was trying not to laugh and chuckling in my head.

I sat down and read this same book with the kids again this week and answered all their curious, innocent questions.
I think they walked away with a pretty good understanding of why our male puppies couldn't make babies with female ones, how I got this huge belly on me, and why mommy's "penis" looks weird.

I took a few pictures of the inside of the book because I couldn't resist sharing some of my favorite pages! Actual quotes are in "quotations" and italics.

How Babies Are Made:
"When your life began, you were very,
very small-even smaller than a dot made by a pencil." 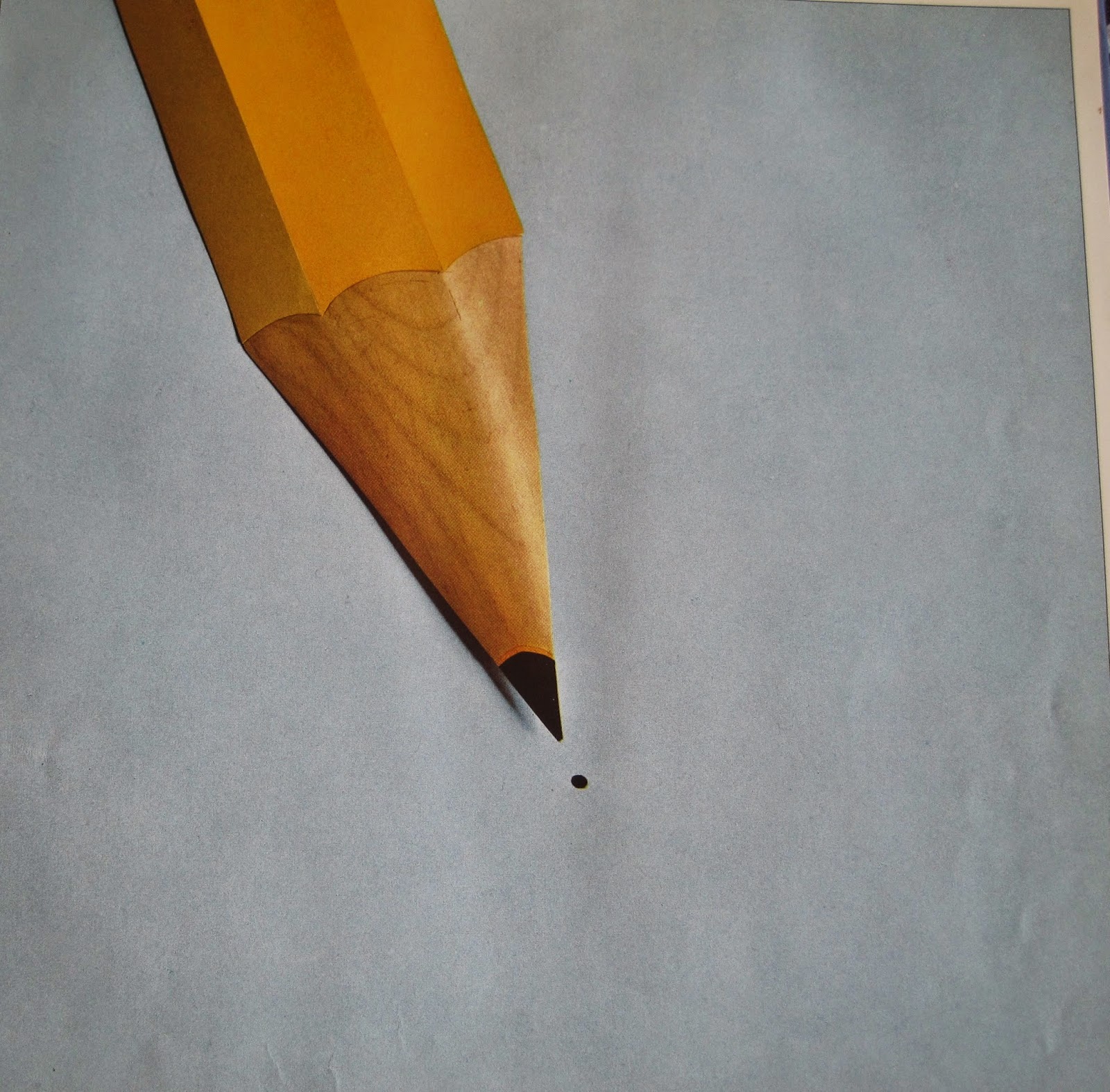 "Many living things, even you, began life as a tiny egg." 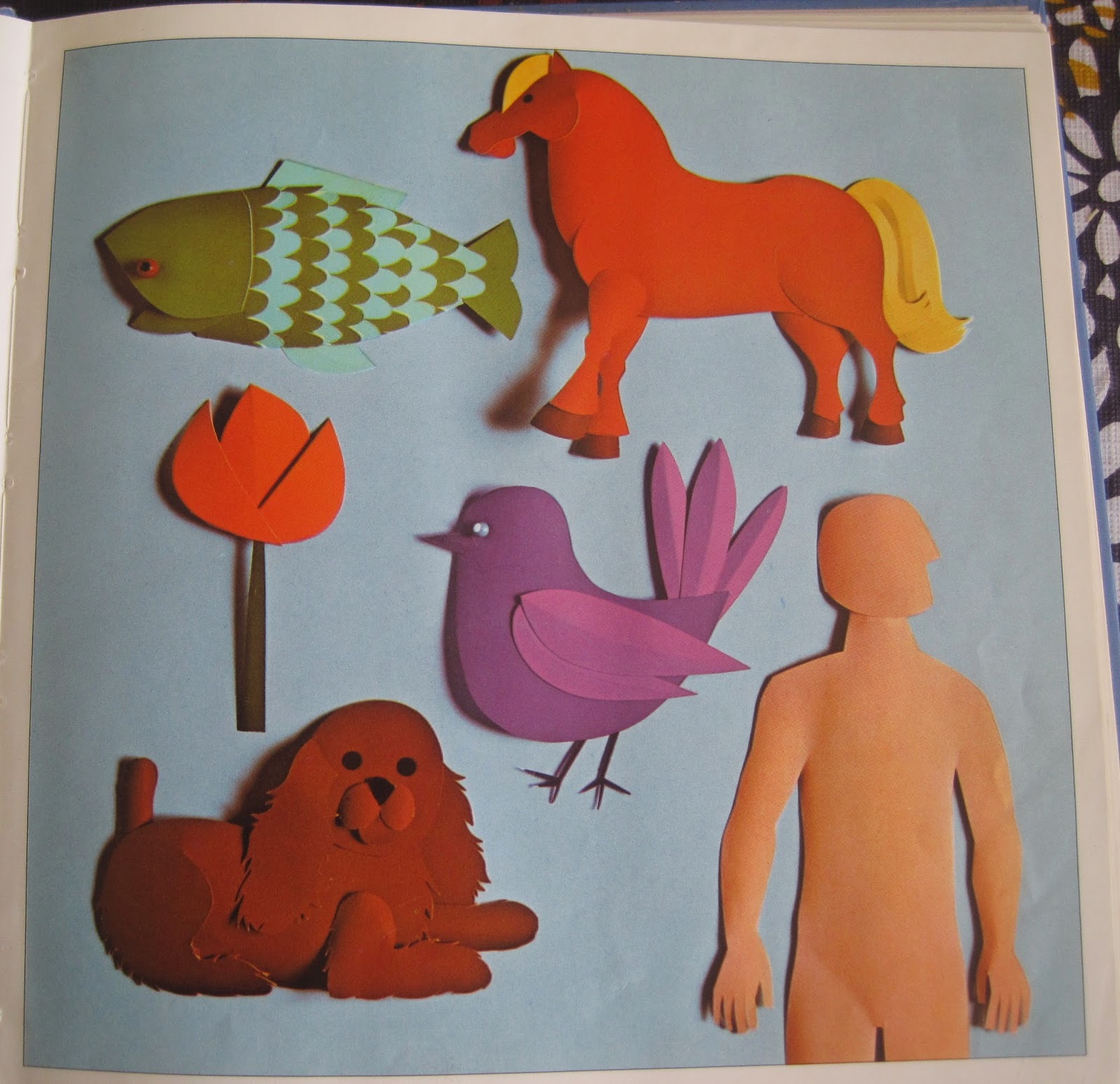 "The egg cannot grow into a flower seed without a helper" :Introduce, pollen. 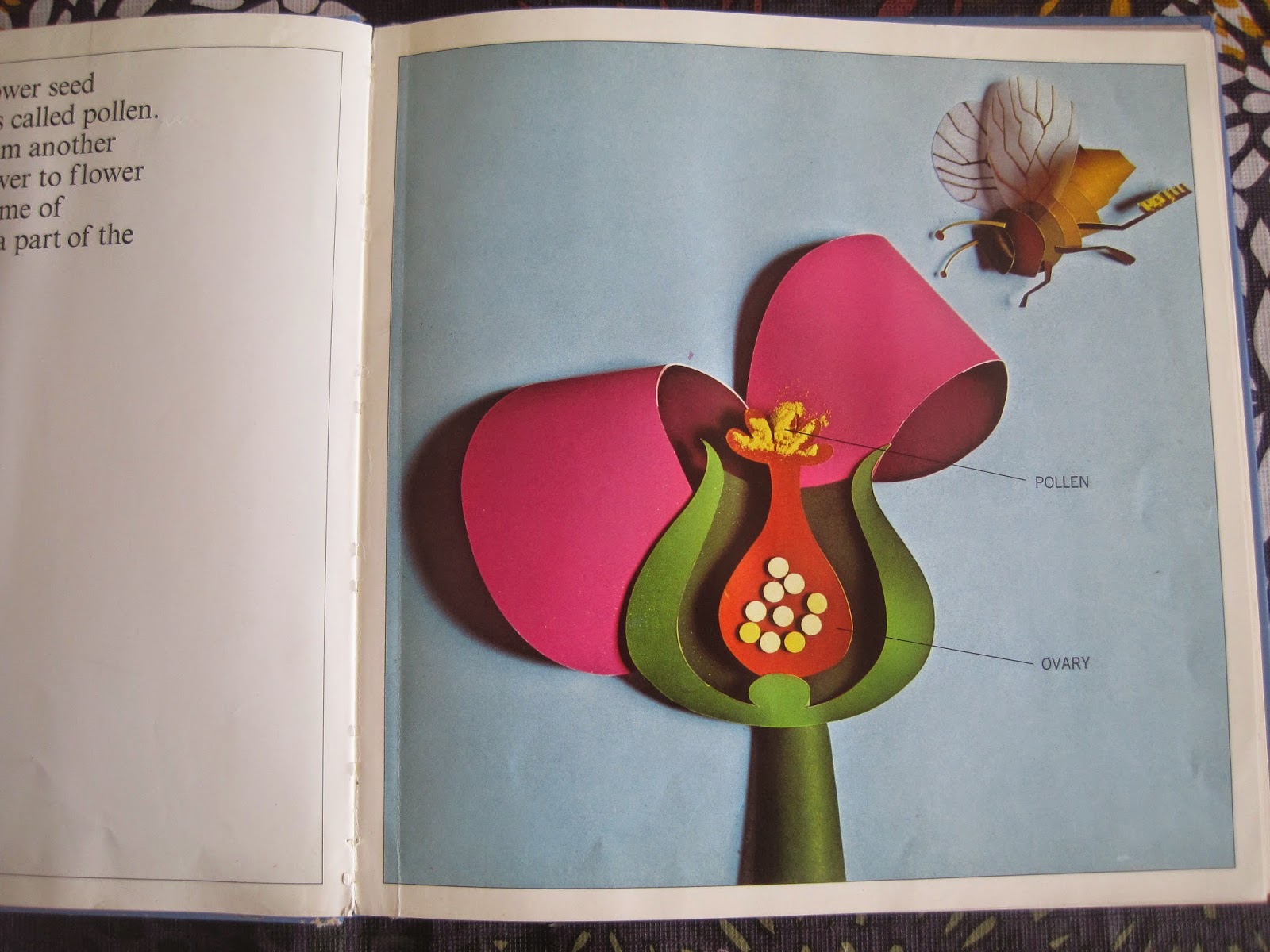 Both plants and animals need two things to procreate: 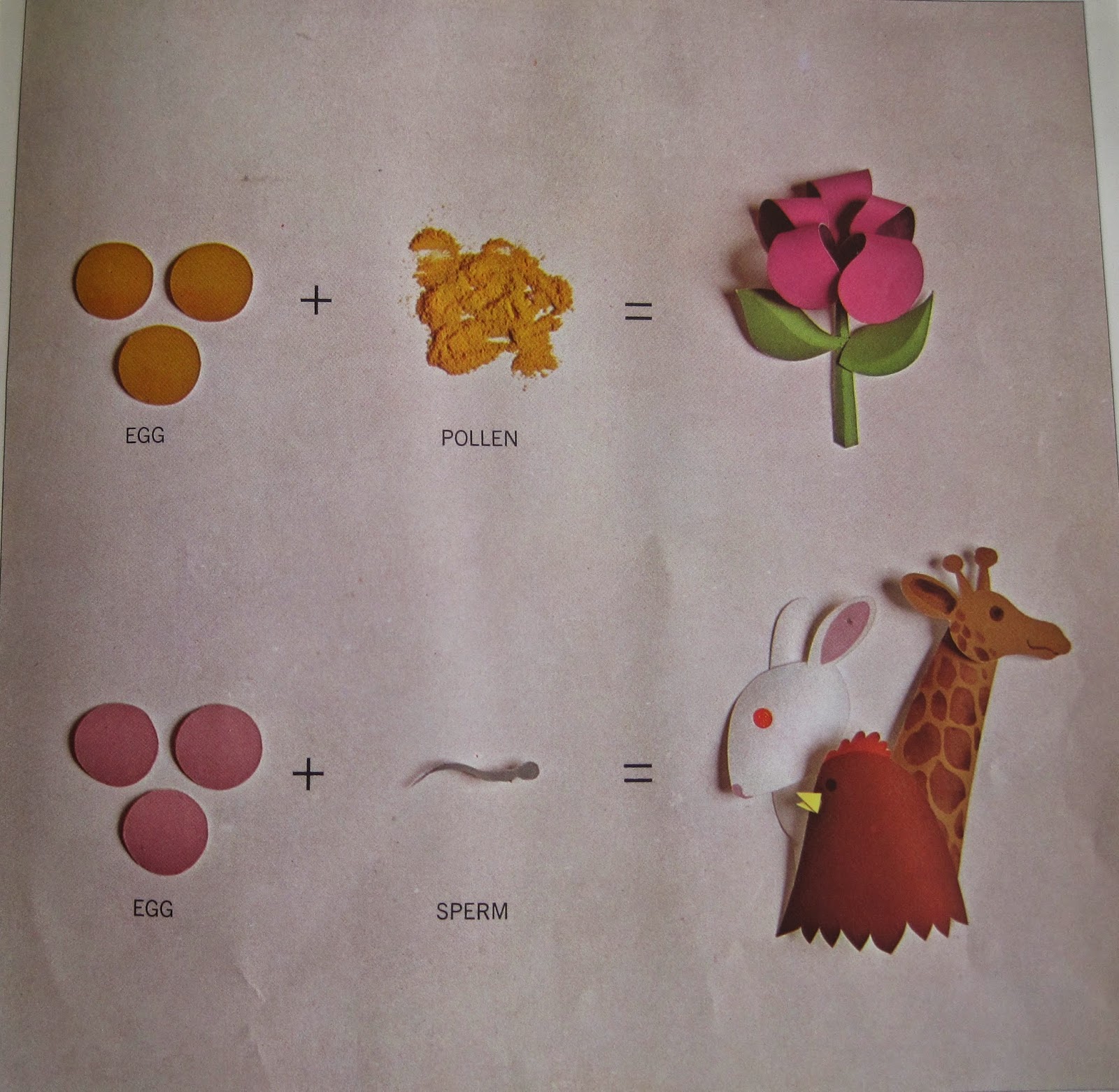 How chicken babies are made: 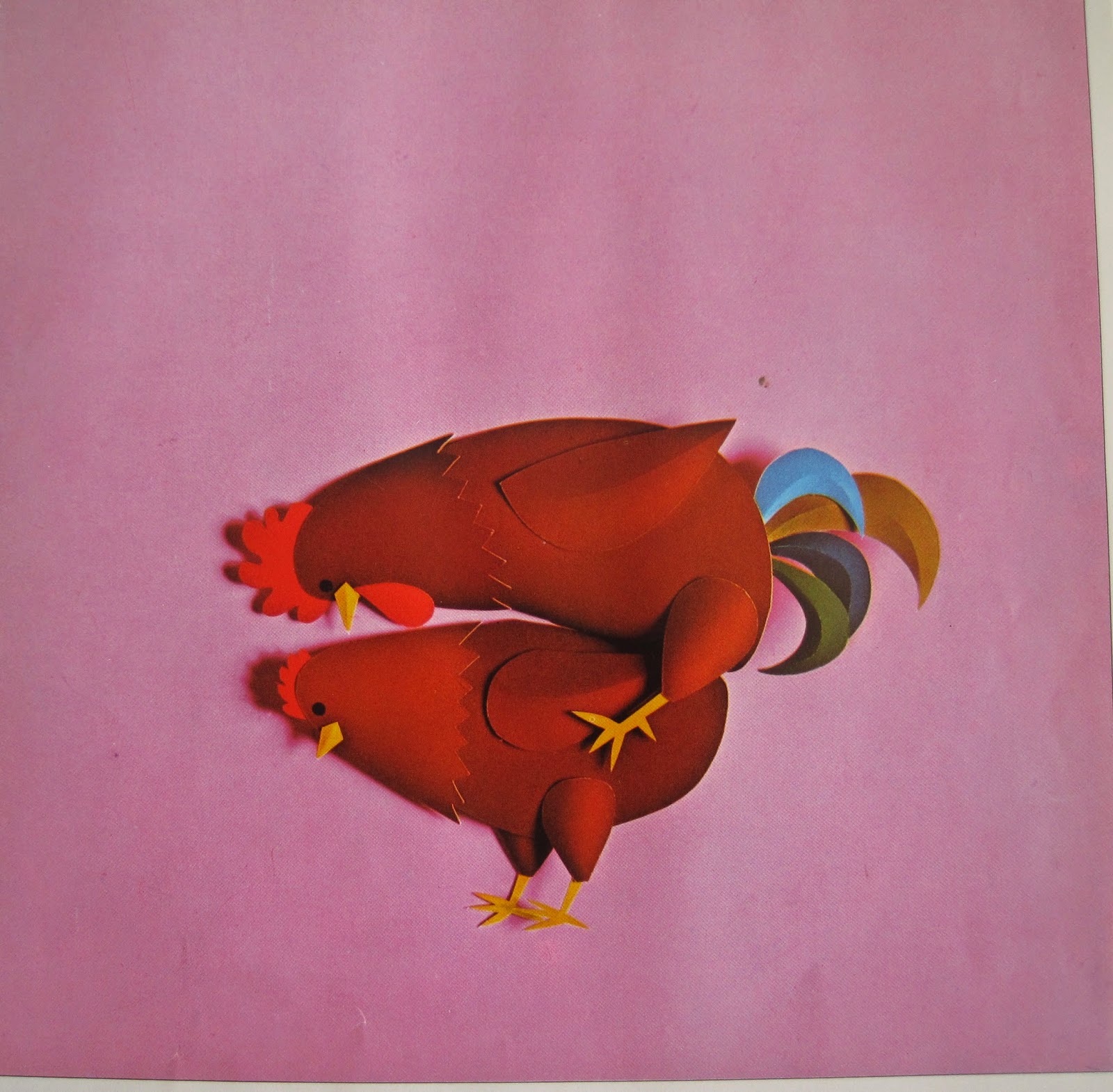 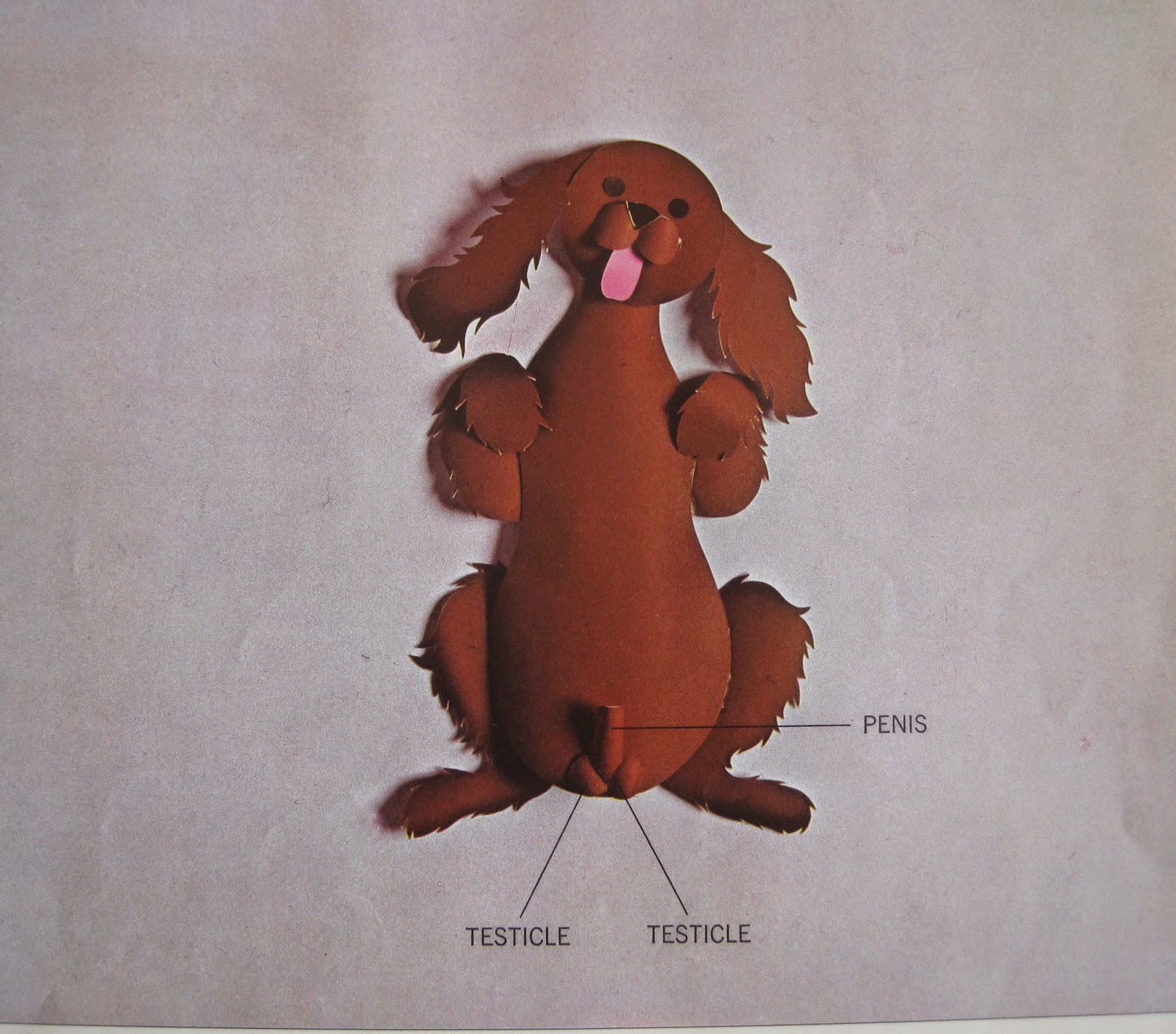 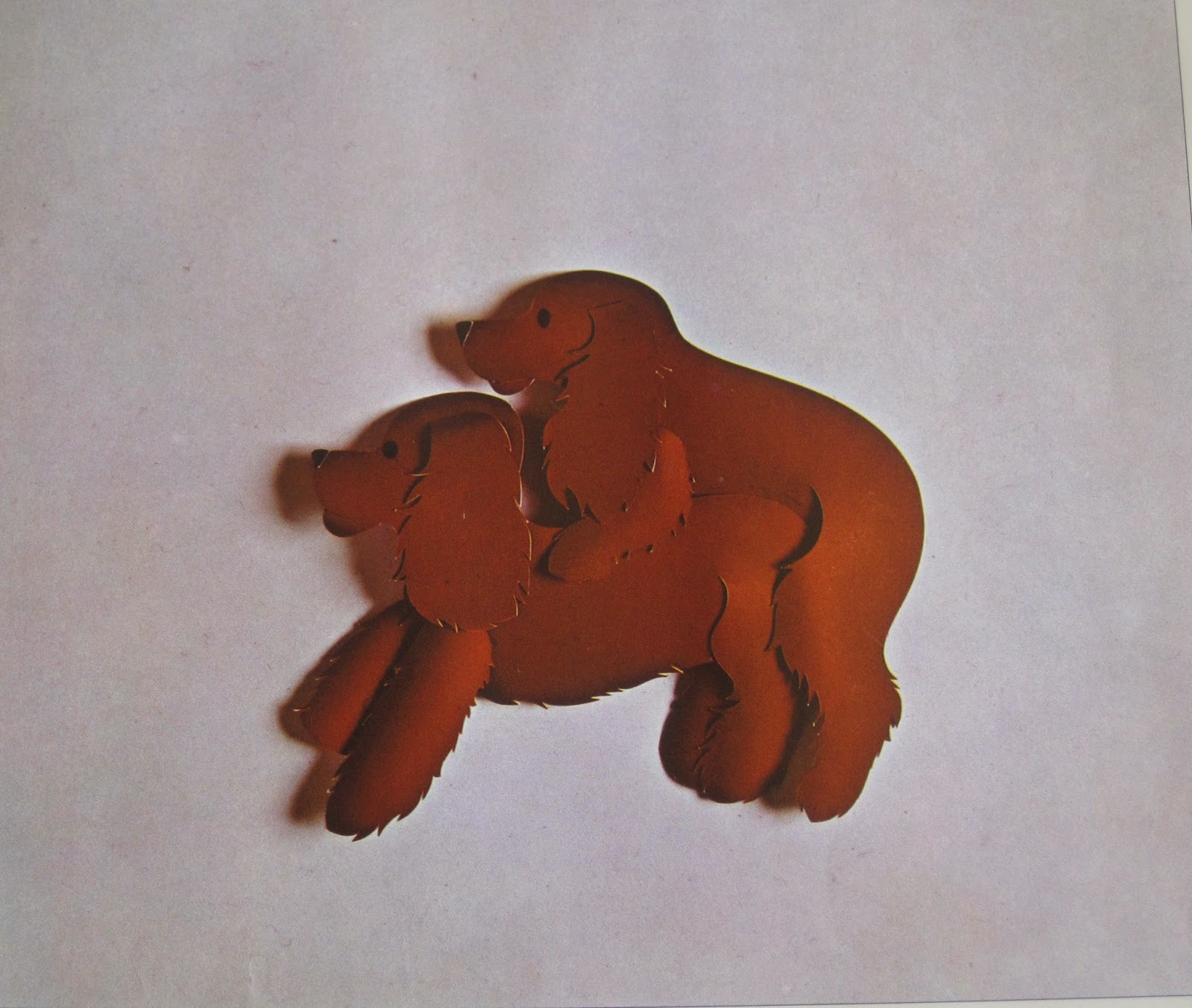 "After it is fertilized, the egg leaves the ovary and moves to another place, called the uterus. There it begins to grow into a puppy." 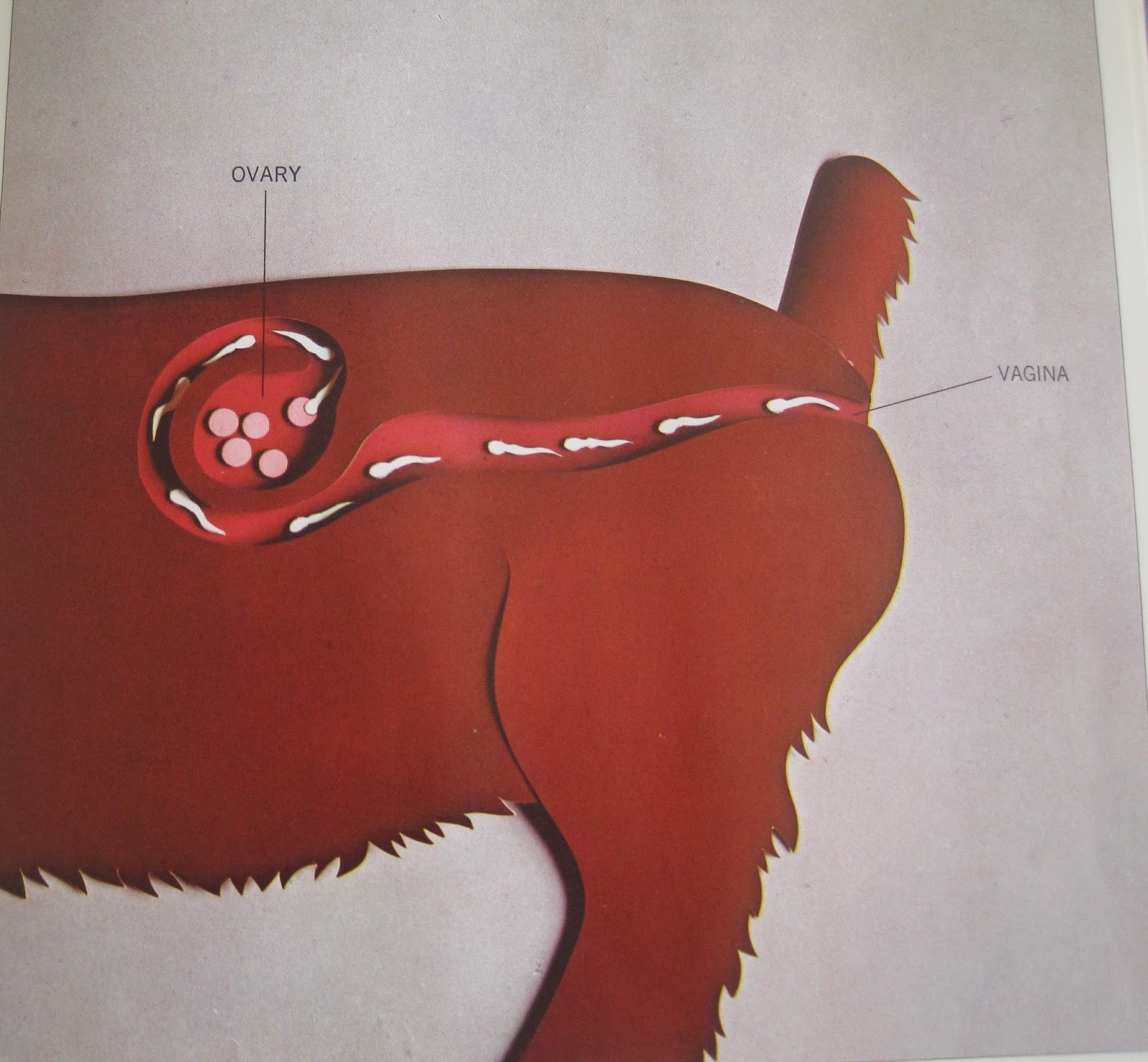 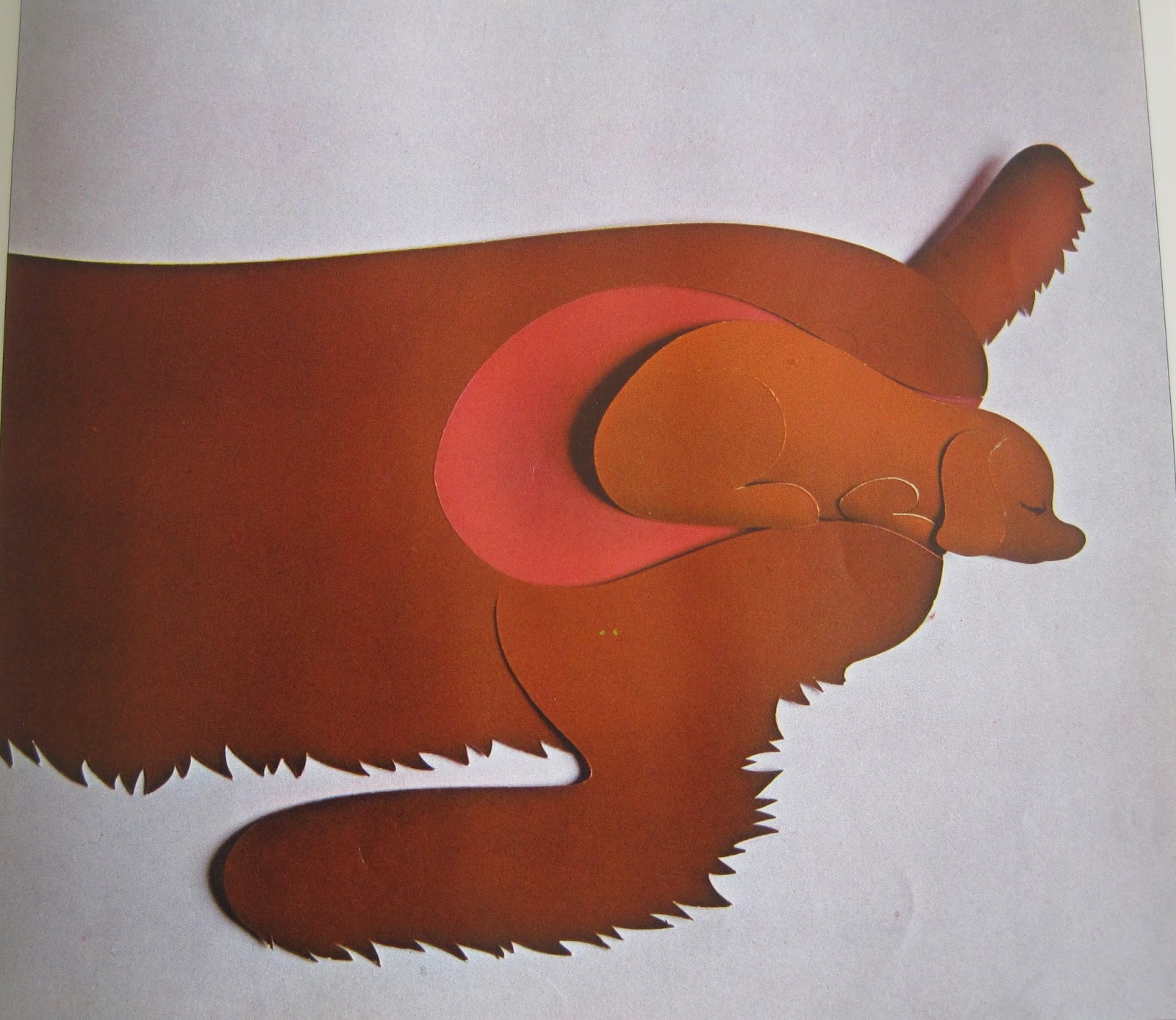 Humans! "Human babies begin just like chicks and puppies. A sperm from the father must join with an egg from the mother:" 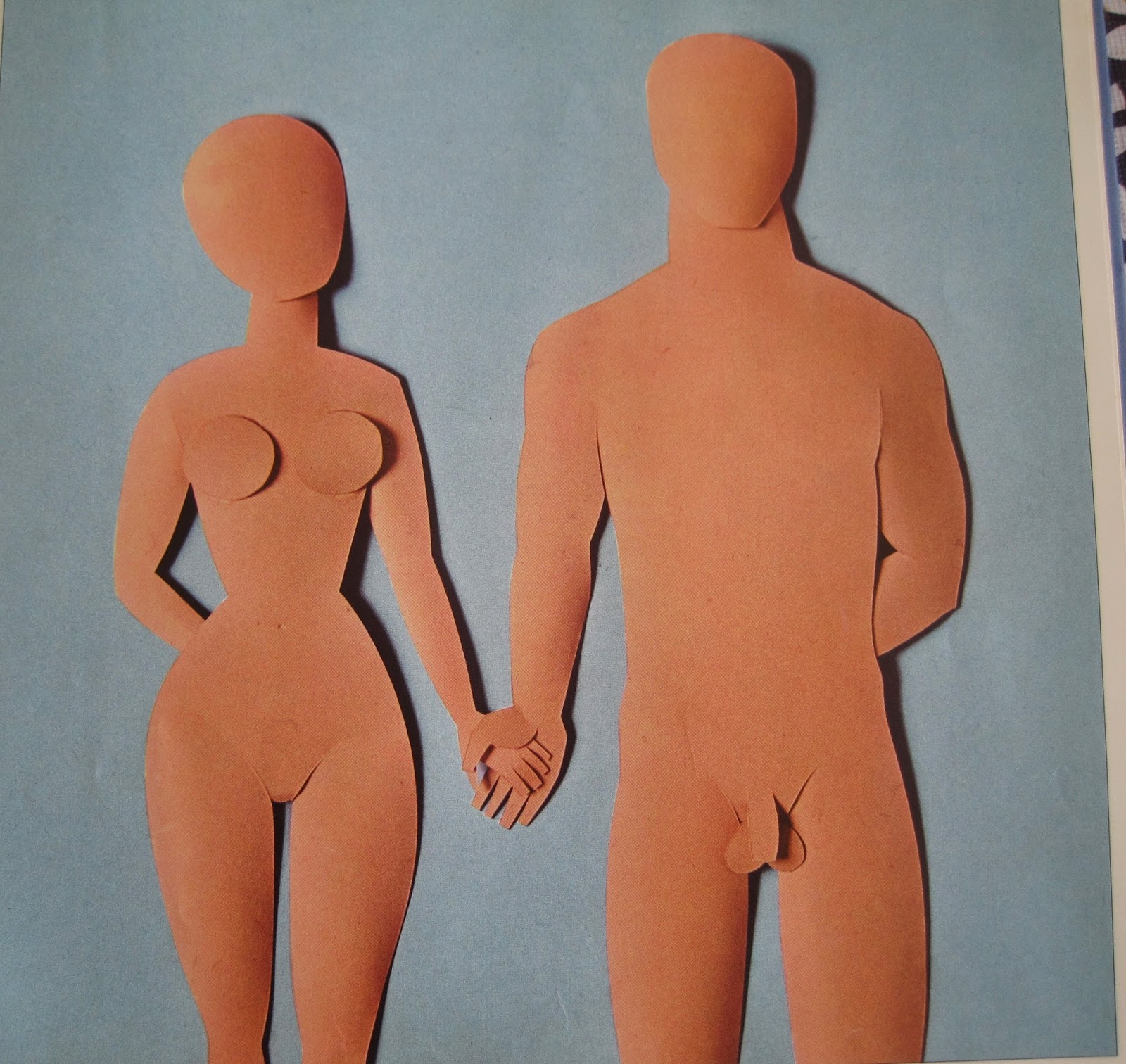 "The sperm, which come from the father's testicles, are sent into the mother through his penis.  Unlike plants and animals, when human mothers and fathers create a new baby they are sharing a very personal and special relationship." 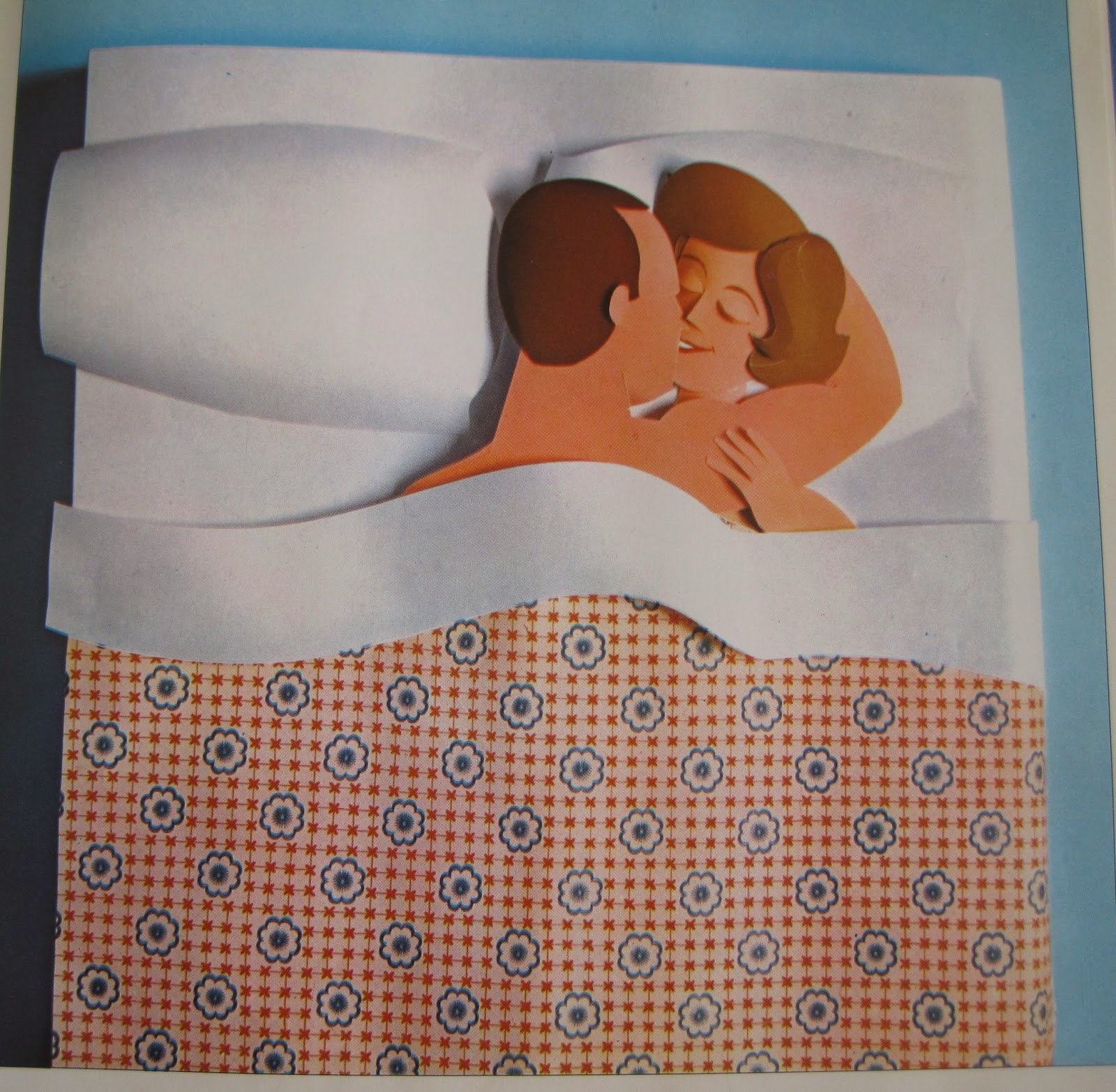 How the sperm and egg meet together in the ovary: 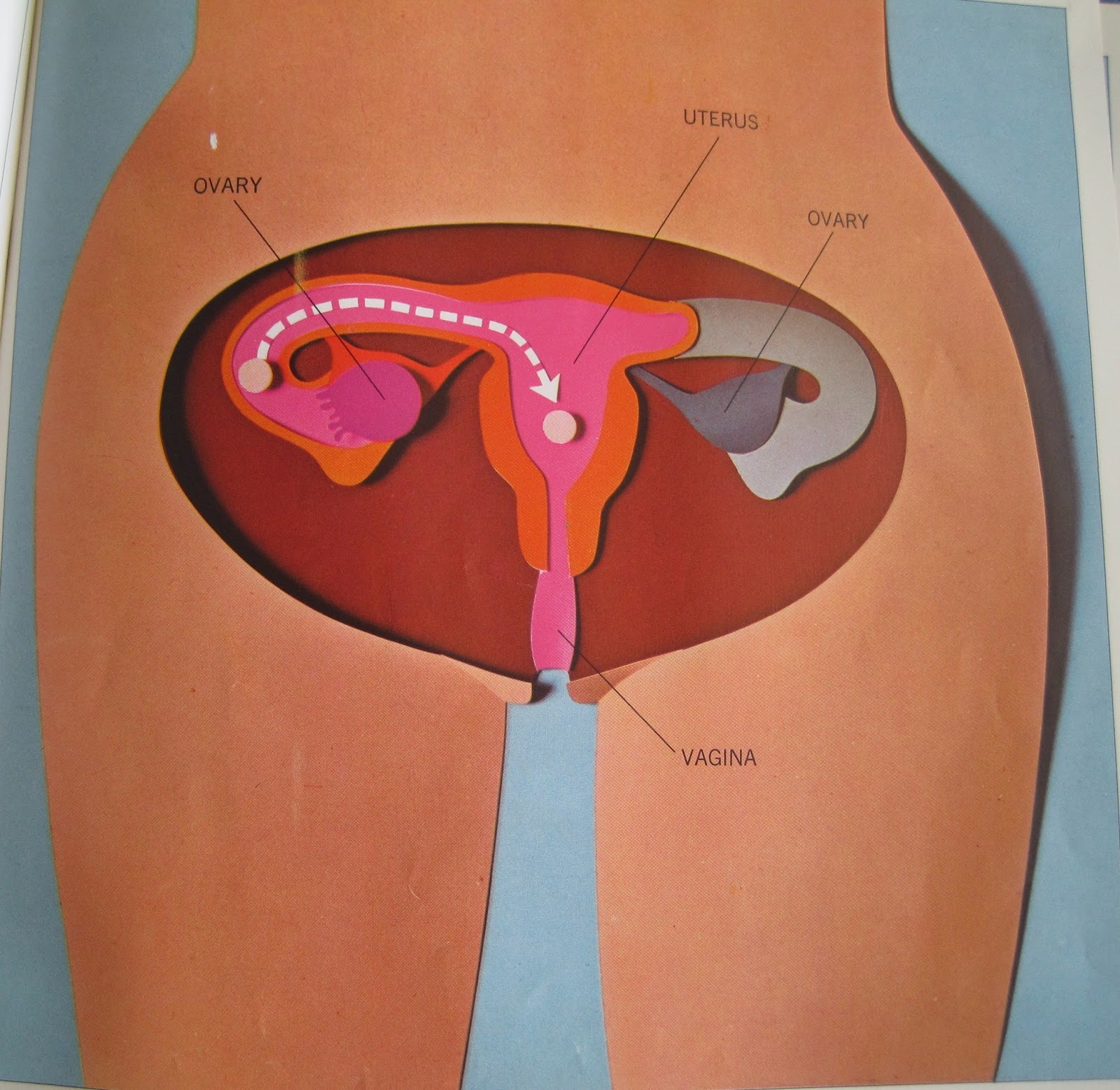 Here you are, attached by an umbilical cord: 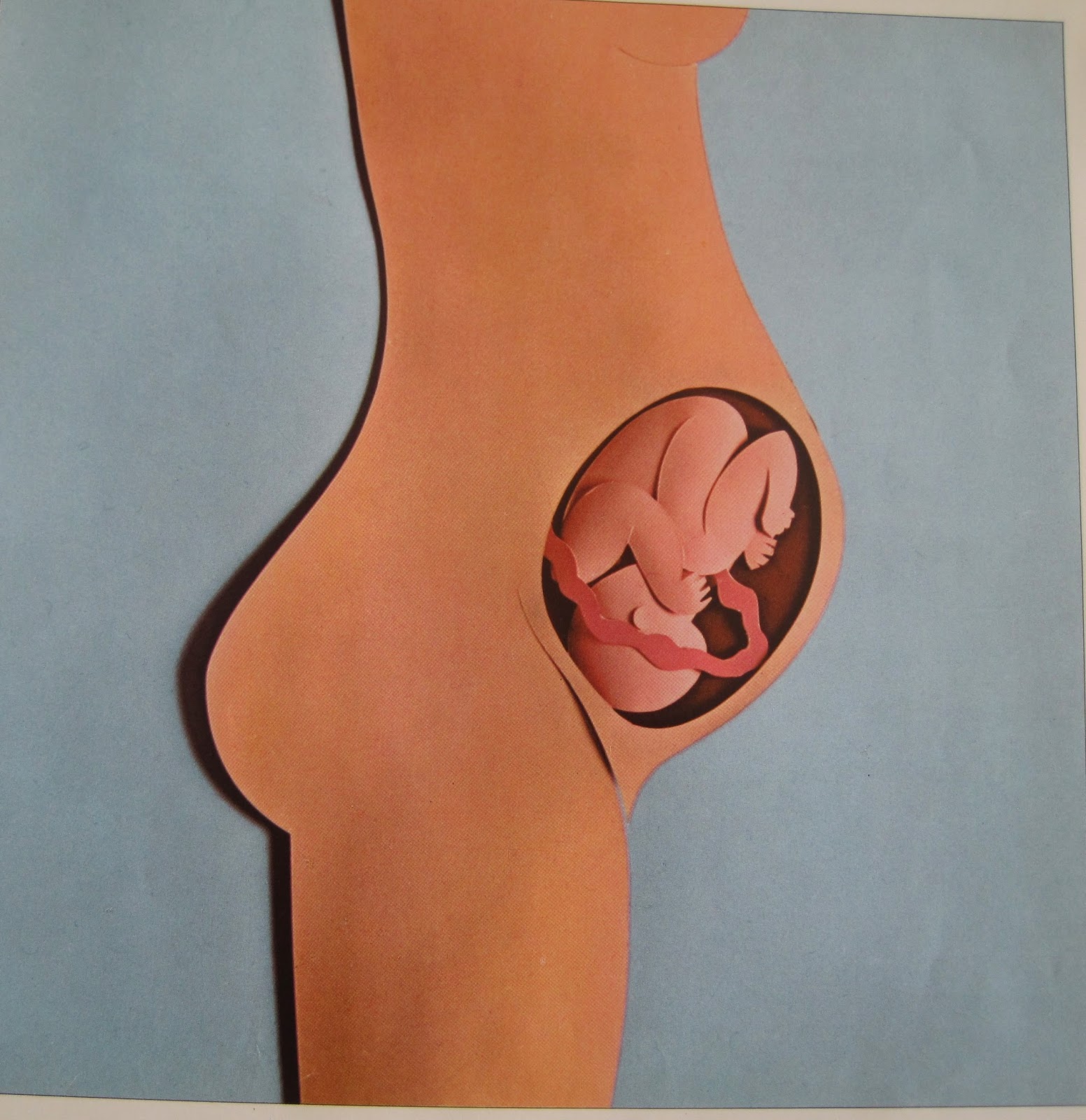 "The muscles in your mother's body helped you go out through her vagina. This is the same opening your father's sperm went into when it fertilized the egg." 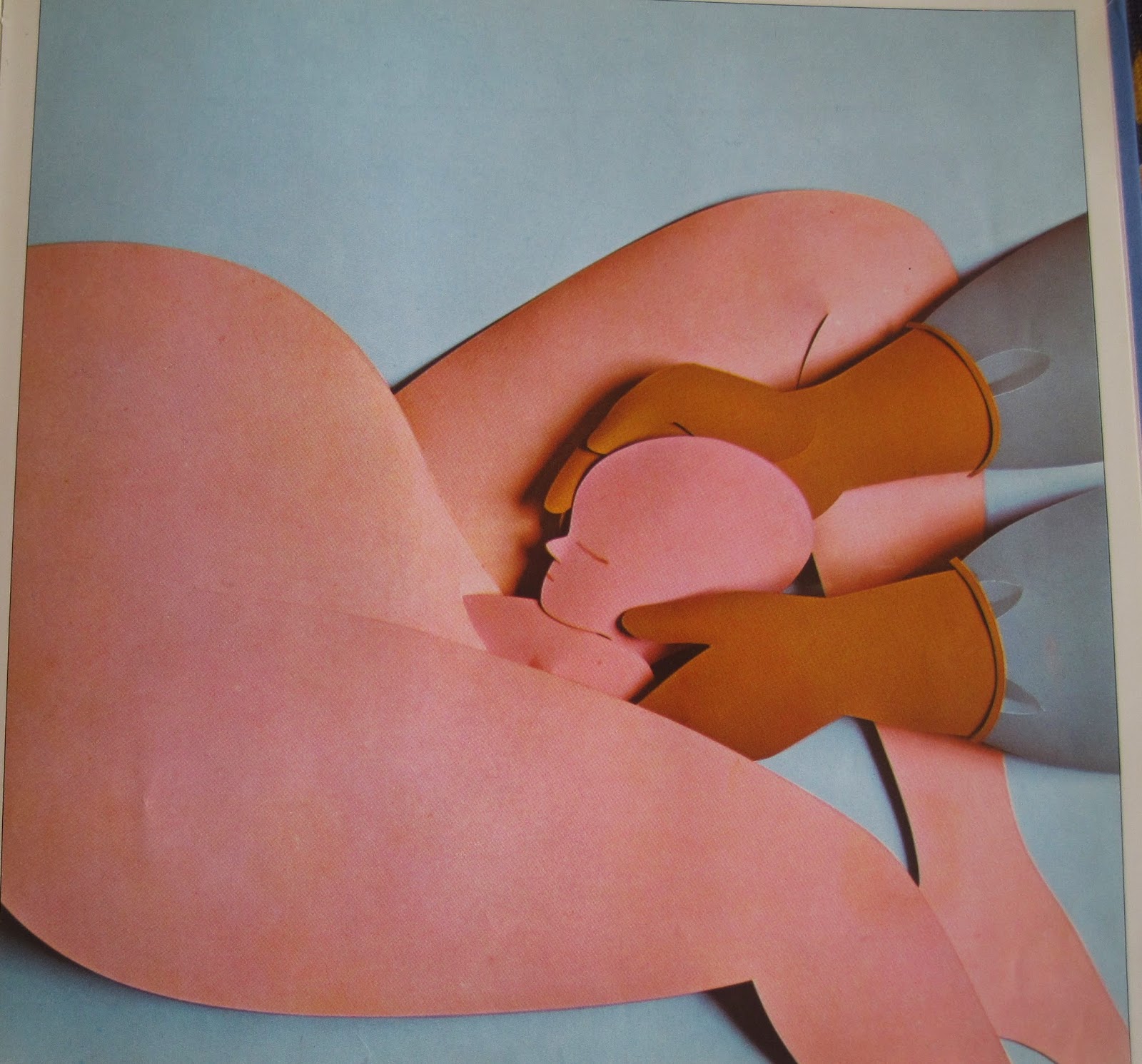 "You were born hungry, just like puppies and kittens, and so you had to be fed. You were fed milk from your mother's breasts or from a bottle." 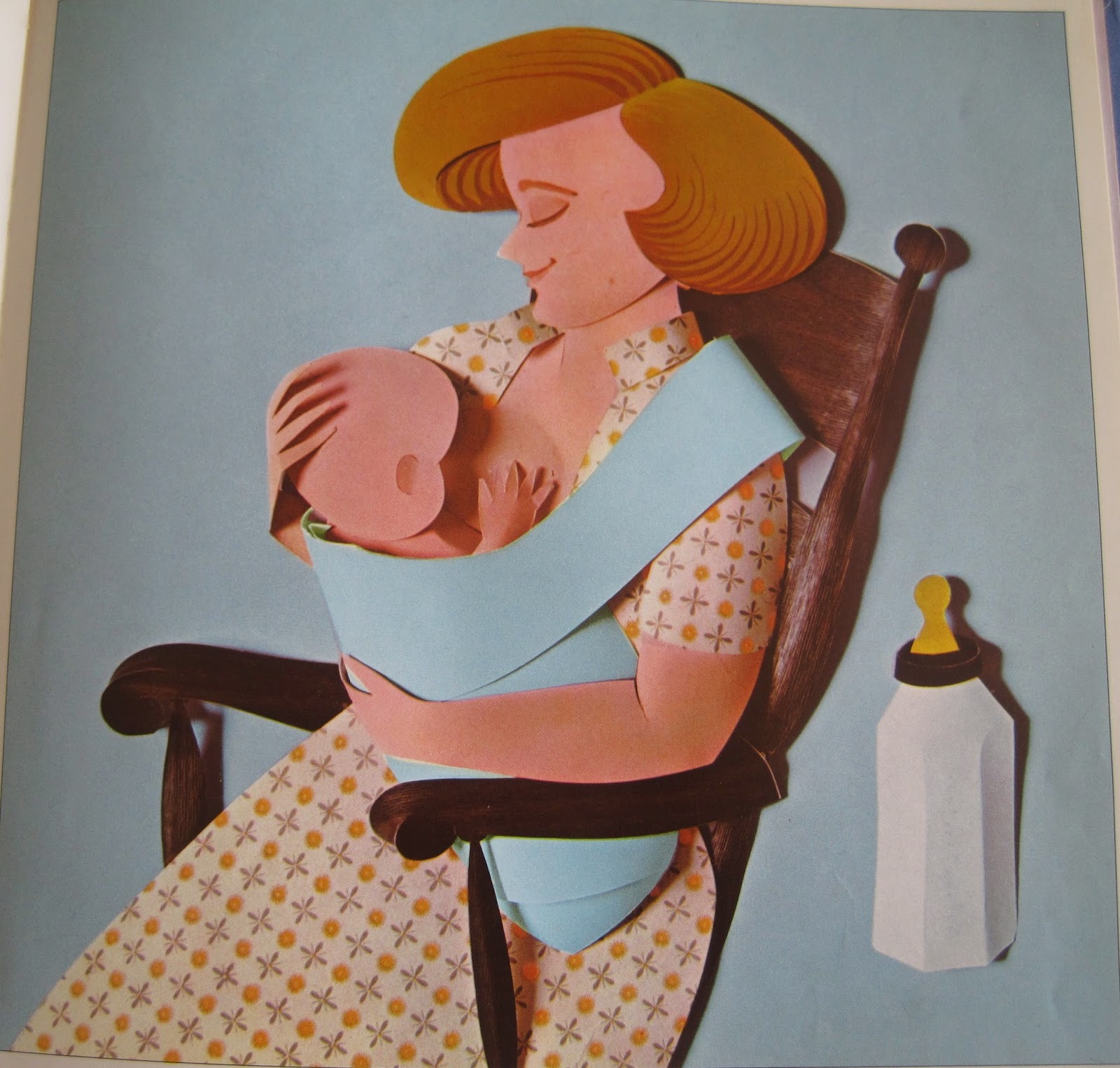 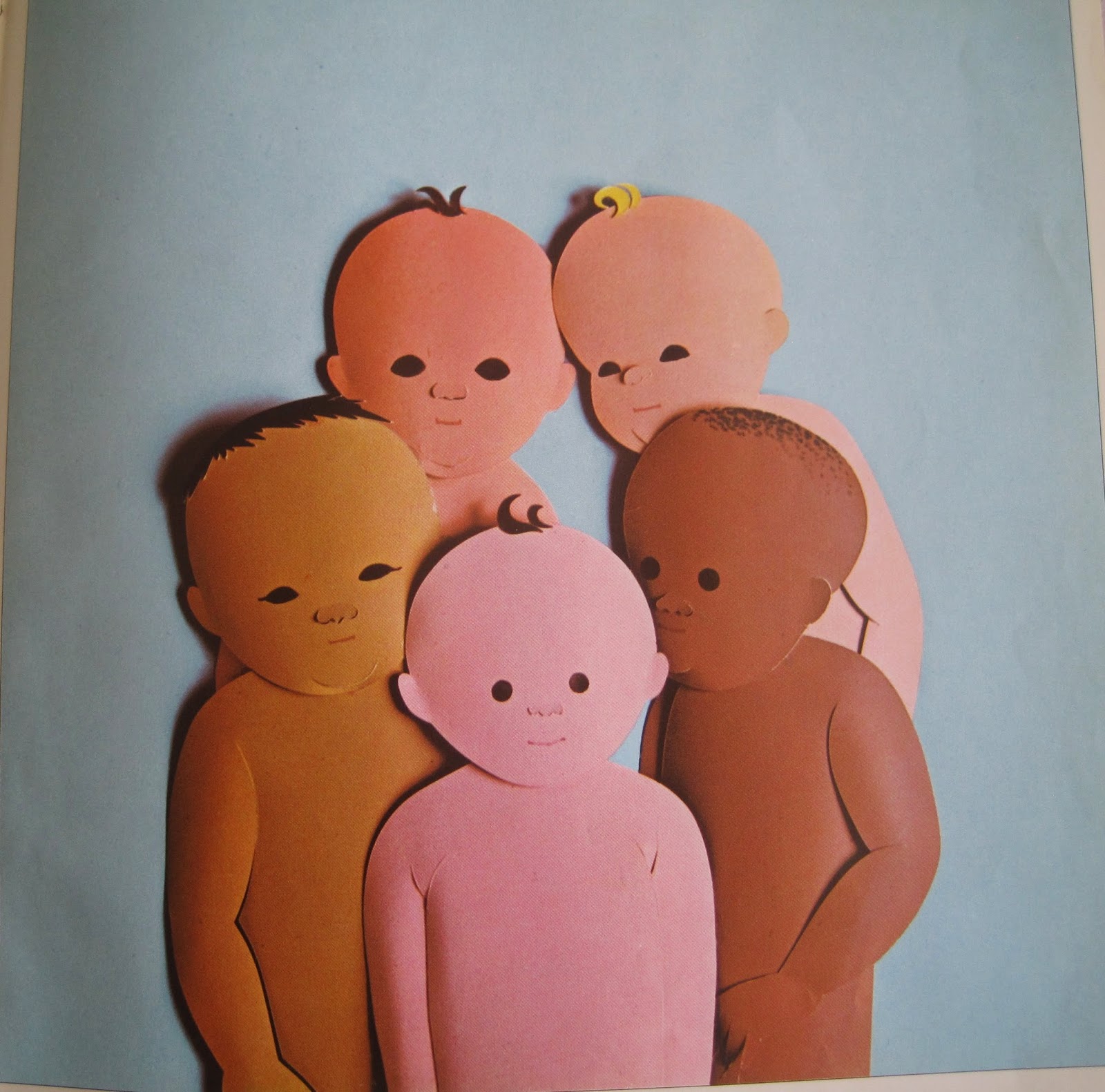 Is that not the sweetest book??
Another sex ed. book that we own, which I really like, is the Usbourne Facts of Life (1985 version) It's full of graphs, and charts, and animated pictures about the science behind life. 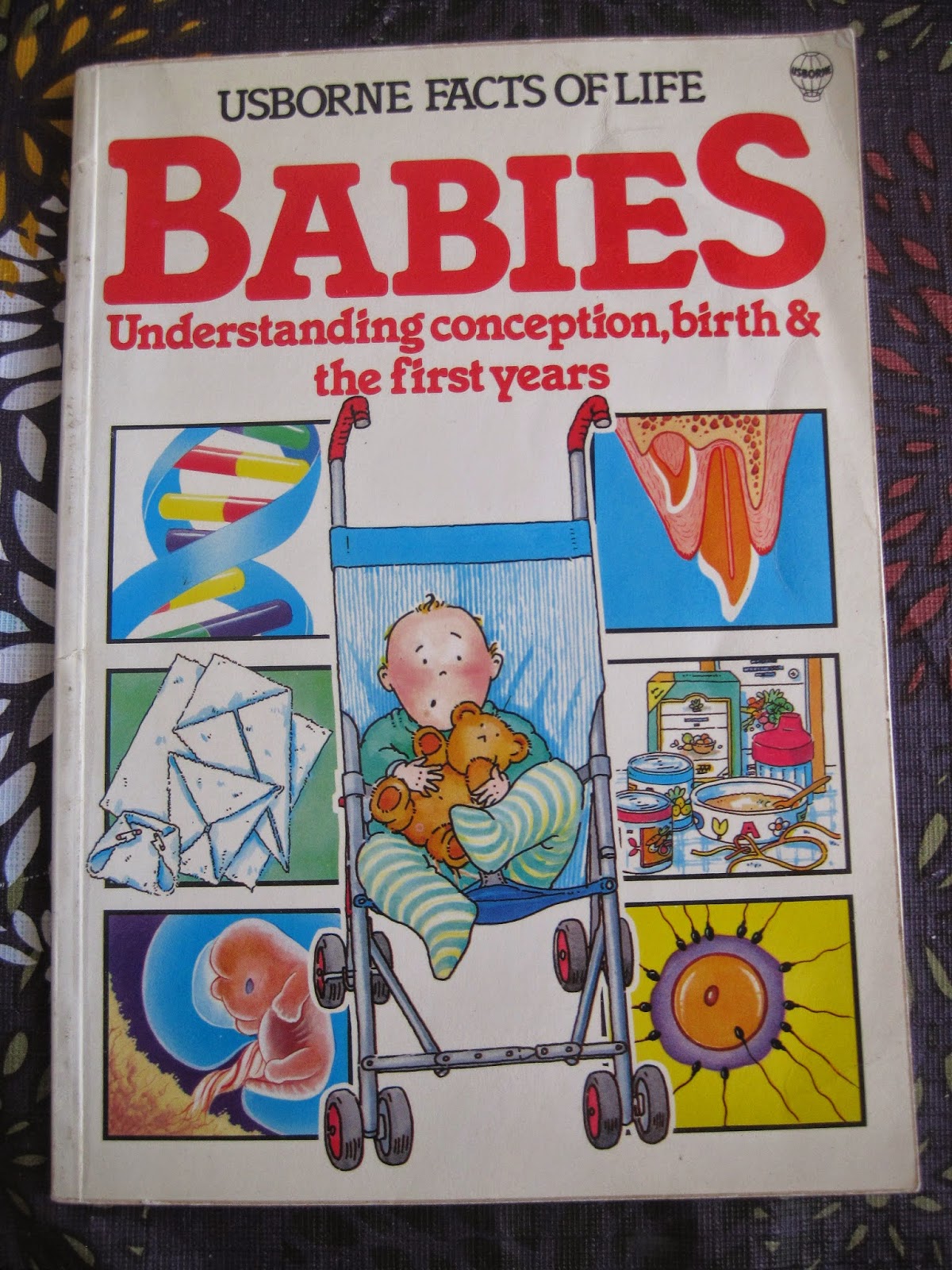 And, How I was Born, by Lena Katarina Swanberg. This wonderful book follows a mother, her husband, and two children in Sweden, as she goes through pregnancy and childbirth with their third baby. It is filled with real-life pictures as the fetus grows and is finally born into their baby! 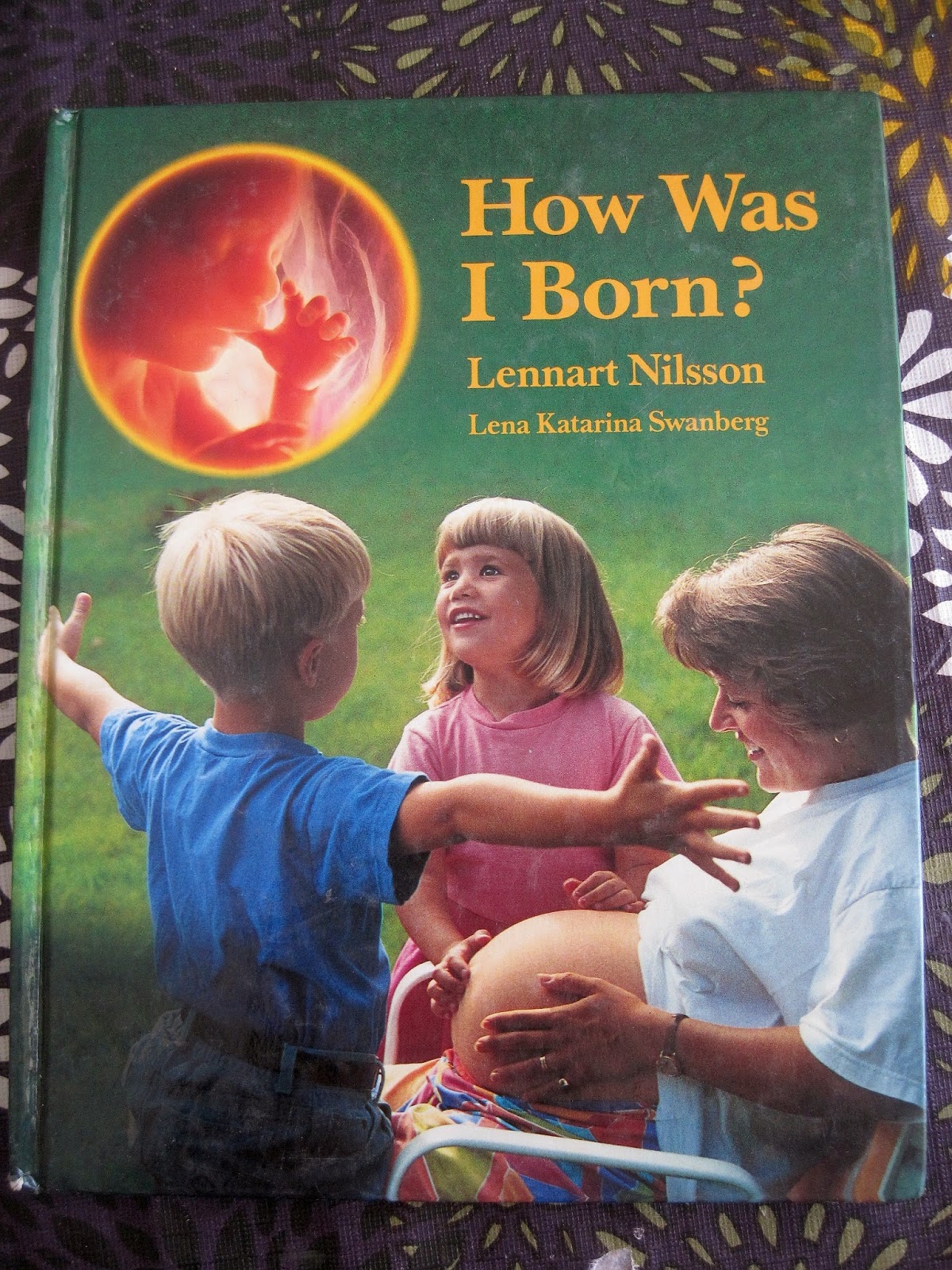 You know I love and appreciate the breastfeeding pictures. 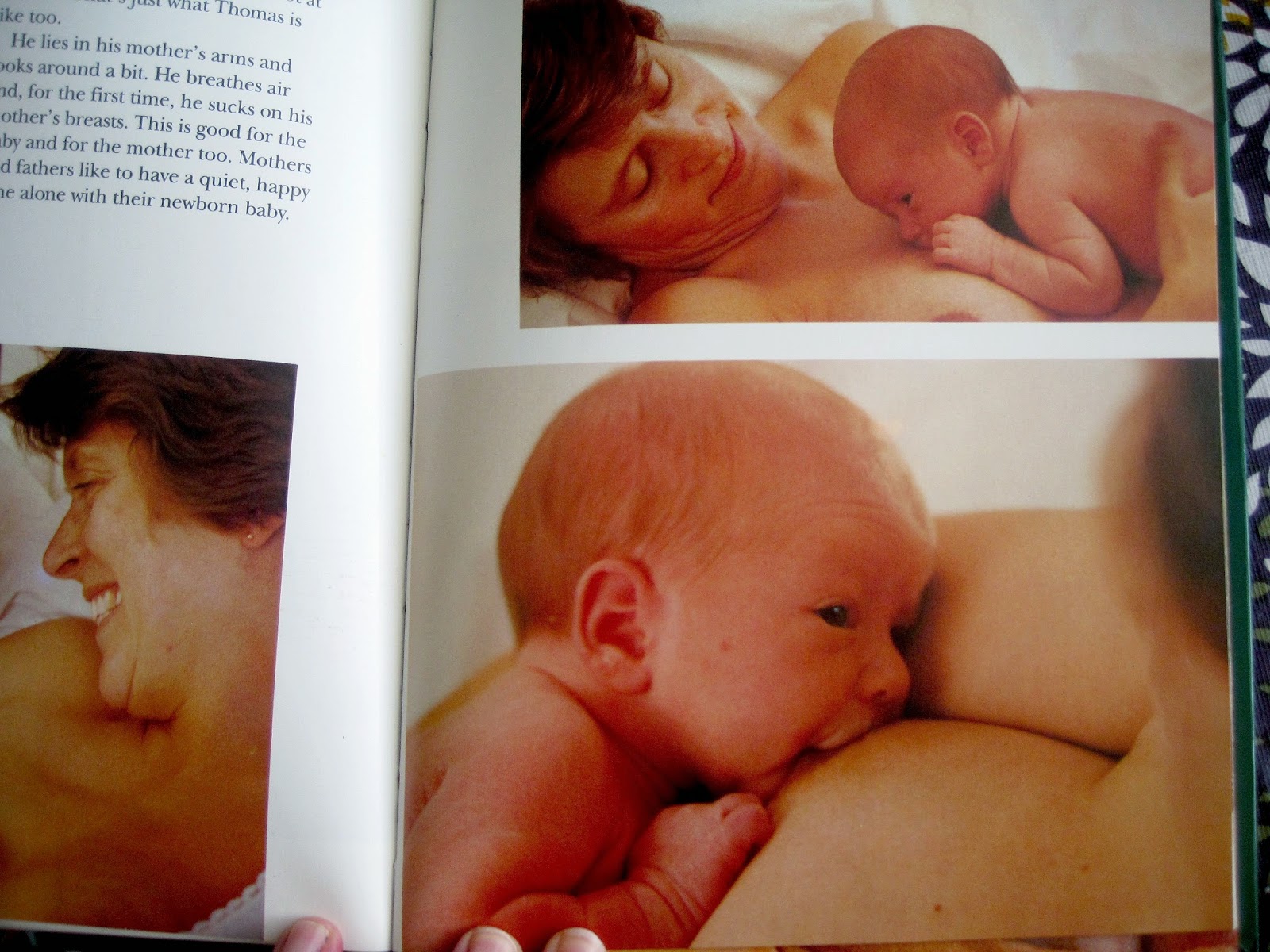 I wasn't going to mention this, but I think it's kinda funny, so I will anyways. My own personal experience with sex education as a child happened this one day when my mom pulled the car over while she was driving with me and my sister. I was about 9 years old. I remember wondering, why the heck are you pulling over? She then quickly and awkwardly explained that a baby is made when a man's penis enters a hole through a woman's vagina. Then she kept driving again. That, and the fifth grade sex education video was about all I learned about procreation as a kid! (No offense, mi madre. I'm sure you were doing the best you could in the generation you came from. :) As a result I was terribly ignorant about sex and the female body for many, many years. Even at age 27, when I got married, there were still some things that my husband was appalled that I didn't know about my own body!  (Luckly, he filled me in, as he was more sexucated than me.)
Overall, I think it's very natural to talk about where we come from. There's no shame or discomfort in explaining the science, the facts, and the beauty behind creation. I'm always on the lookout for more fun books to have on hand, too. Thrift stores are the best for the awesome, vintage, sex ed. books.
Posted by Sally Jackson at 3:37 PM

I love that first book & remember reading it to my kids. We have that open policy about sex & bodies & puberty, too. So much better than the way my parents (didn't) teach me. Now my older ones (17, 15, 13) no they can ask us anything. Rock on, Sally! Luv, sara

Awesome Sara. So nice to hear other parents approach it comfortably, too. It shouldn't even be an issue, me thinks. And what?? You have a 17 year old now? Holy Canoley--time flies. Rock on to yourself!!

Sally Jackson
I'm originally an Island girl who moved to Utah to raise our 4 wild and wonderful boys with my awesome husband of 13 years. I love reading, writing, crafting, serving in my church, and being outside.