The grocery bagger that pissed me off today

This afternoon I stopped by one of our small-town grocery stores for some milk and bread and other food necessities. I was in a good mood, considering my uterus felt like it was touching the floor, and I was ready for my 3'oclock nap!

However, as we were checking out, the grocery bagger behind me was making small talk with a patron, as he was bagging her groceries. He was an elderly, white, American in his early seventies.
The subject of cell phones came up, because the lady was holding two cell phones, and I could overhear their conversation because I was right there.
The bagger said, "You know, there were some Saudi Arabia students in here awhile ago and one of them had four cell phones on him!"
So the lady responds casually,"Oh yeah, that's a lot of phone bills."
Then the bagger says with a chuckle,"I was going to ask him which one ACTIVATES the bombs? hahahaha."

And that's when I turned around, pissed and ready to blow his head off (metaphorically). Because I don't think jokes discriminating against certain ethnic groups are funny. Or appropriate. Ever.
I yelled over, "Sir, you'd better check yourself because telling jokes that are racial and discriminating against groups of people different than you is NOT okay. I don't want to hear it and these people don't want to hear it."
I got one nod from a bystander across the aisle, but most everyone in the lines next to me  kept their eyes down.
He immediately tried to excuse himself by saying, "Well, I am a Veteran of 23 years, so maybe I deserve a little credit!"
"Nope," I said back to him, "You deserve absolutely no credit for being racist and discriminating towards the Saudis that live here. It's wrong and it's not okay. If I were you I'd check yourself before telling stupid jokes like that again."

He turned his back to me and didn't say another word. As I walked out to the car I couldn't  believe how pissed I was, and how forcibly I spoke to him, but otherwise, I felt completely justified.
I suppose I finally got sick of all the small-town racism and ignorance we have here (in small-town Utah and America). I hear about ignorant comments like this all the time and still can't believe how blind people are.

Just the other day a friend in my neighborhood was saying that a lady complained because she was flying an Israeli flag in her front yard. The lady was walking by with her dog and said something along the lines of, "What's with the flags? I don't like that you are flying Islamic flags."
The friend explained to her that her husband serves in the military all over the world and they like to fly the flags of the countries he's served in. The elderly lady felt that my neighbor was representing terrorism or something, which is so completely ridiculous, it makes my insides hurt. 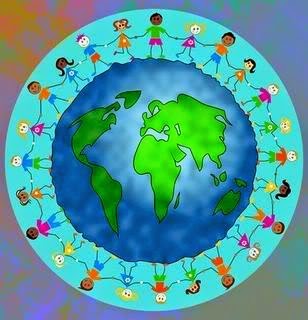 My husband had another incident when we first got here where an elderly man at the auto store was complaining about all the Muslims here and how we need to be more careful who we associated with. My husband tried to keep his cool as he explained to the guy that Muslims are actually followers of the Islam religion, not a group of people that are out to get him. But the dude didn't get it and kept on with his ignorant rant. Finally my husband just ignored him, because what can you do?

And that's the point I was trying to make to veteran bagger today, because Saudi Arabia is a country in the middle east, not a group of people walking around with cell phone bombs.
And flag lady, Islam is a religion, not a group of terrorists out to get you.
I say, please stop stereotyping people, and discriminating against people, based on their country or religion of origin. (It only makes you look stupid and spreads hate and fear.)

God Bless America and the melting pot of races and cultures that live here! I, for one, am super stoked on the Saudi Arabian population that has started coming to our small town. The people are not only very nice and gracious, but we finally have a small middle-eastern store that sells spices and freshly made Nan!

Email ThisBlogThis!Share to TwitterShare to FacebookShare to Pinterest
Labels: Just my thoughts

Good for you for speaking up Sal. That sort of thing chaps my hide as well or as Willie Nelson would say "sticks in my craw!"!