It's okay cuz I have pretty face

I am so grateful for the times I had in my single-young-adult-life to travel and be spontaneous. Sometimes I get feeling a little tied down with children and animals and a mortgage that I want to burst out of my current self, run hard,  and jump on an airplane to Indonesia. Don't get me wrong, I wouldn't change my parenting-adult-life for the universe-- I just miss spontaneity. It's hard to be spontaneous as a parent. Sometimes I really just want to throw all my kids in the car and go on a spontaneous-adventure-of-a-lifetime, then I remember it's going to take just as long to pack diapers, wipes, snacks, lunches, extra food, water, bandaids, and other provisions I might need. Add on more time for poo breaks, for tantrum management, and for breaking up arguments, and the trip might end before we get there.
It kinda sucks the spontaneity out of it all. These days things are more planned out and prepared, and that's okay too.
(It's important to have sanity as a parent, as well, which might beat-out spontaneity in the end.)
So when I'm feeling stifled, It's good for me to remember that once-upon-a-time I did burst and run and jump onto a plane to Indonesia... Twice, in fact.
The first time I was 17 and flew with a girly-friend to the tiny island of Bali. We wanted to go on a surfing-hitchhiking-adventure with the money we'd saved up from our little-teenager-jobs.  It was probably one of craziest, most spontaneous things I've ever done! I'm so glad we went (but no, I will not let my teenage child fly to a far-off island in Indonesia when they are 17, with no responsible adult supervision!)
Second time around I was 21, and found myself on a backpacking trip with 2 other girly-friends. We flew into Thailand, caught buses down through Malaysia, and then a ferry across the Indian sea to Indonesia. 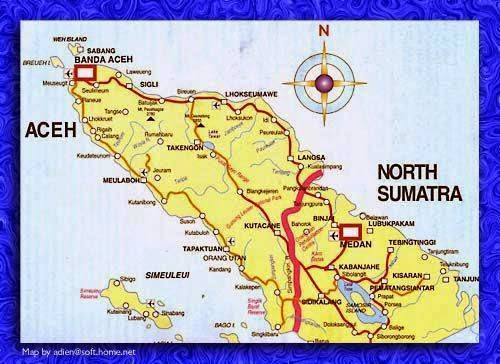 Wait!! This post was supposed to be short because I don't have a lot of time to write these days, so let me cut to the chase:
Skip the travelogue to get there, we are now staying on this teensy weensy island at the northern end of Sumatra, just a couple hour's boat ride across from the Banda Aceh Province. It is an island dominated by the Muslim religion, so we had to stay covered most of the time to respect the religious culture of the island. However, at the farthest tip of the island there is a small village for tourists to stay at. In this village you can walk around in your swimsuit all day  if you want, and sleep in small bungalows. We stayed there for an entire week, swimming, snorkeling, sailing, and eating huge amounts of fruit and fish. There was also a brothel in the village, but we stayed clear of that business. Gross.
One night there was an earthquake from the seismic activity happening there. I awoke in the night all freaked out because pigs were outside my window squealing and some witch doctor lady in the next bungalow over was chanting to the earthquake Gods. Our bungalow was built up on stilts at the edge of a rocky slope, and I was pretty sure we were going to go sliding into the sea and never be heard from again.
So anyways, we survived the quake, and then the day before the last day we were staying on he island we decided to wash our clothes near the village well. Not the Muslim village, but the tourist village, where you could wash your clothes in a swimsuit because the entire process involved getting really wet.
First we had to bring up a bucket-load of water from the well to wet our clothes. Then we had to scrub them by hand with soap and a scrubby brush. Then we had to get more water up from the well to rinse them. I had maybe 3 or 4 shirts and a couple pairs of shorts to wash, plus my under-things, so not too much laundry, yet we were terrible at working the well, so it took us longer than we'd thought because spinning the rope to get the bucket up and down the shaft was more work than we'd anticipated!
At one point I was bending over my pile of clothes, clad in nothing but my bikini and my tan behind, scrubbing furiously and concentrating seriously, when I felt a hand slap my bottom. Real hard. "Ouch!" I shouted. I looked up to see which one of my friends was trying to be funny, when I saw that it wasn't one of my friends at all. It was an older Indonesian woman balancing a huge basket of laundry on her head. Just like in the movies.
I smiled because I really didn't know what else to do.
The she smiled back and said to me in her broken English,"You have big butt. But it's okay, cuz you have pretty face."

Sometimes I think about that moment when I'm feeling the need to get away; It was a humorous, only-in-a-foreign-country-moment that made my traveling  experience to Banda Acheh Province so memorable, yet,  I don't need to go all the way to Indonesia when I have 3 little boys that tell me that almost every week!
Okay maybe not the part about having a pretty face, but at least once a week someone tells me I have a big butt! And at least once a week someone slaps me really hard! And I can put on my swimsuit and pretend that my washing machine is a deep, dark well.
It's just like back on that tiny island in the Indian Sea.
It's so spontaneous, so surreal, so within my grasp.

I'm kidding, of course. But it's fun to reminisce. Fun to think back to the days when all the world was mine to explore, with my big butt.

Can I tell about my belly laugh at this? Lovely!