We discovered a really fun park last week! Sometimes I forget that just 45 minutes south of here there is a 20-30 degree temperature difference and all I have to do is drive to get there! I was feeling pretty tired of the snow and cold last week so I packed up my 3 littlest boys and took them to this new, fun park in Washington, UT (Z didn't want to come so stayed home to do his paper route). It was fabulous! Not only was it sunny and warm--and I'm laughing here because it was 37 degrees F instead of 15 F, so HUGE difference--but it had all these fun amenities and we weren't shivering cold the entire time! There was a duck and fishing pond, sidewalks for scootering, large fields for playing soccer, a playground for climbing, and a walking trail that led down to the Virgin river.
It was hard to decide what to do first but we found ourselves down at the fishing pond where the boys rode their scooters in circles and fed the ducks some bread.
Odin tried his hand at fishing with his fancy fishing pole but it kept getting tangled and stuck and both of us started getting really frustrated. We finally decided to forego fishing and play soccer instead! 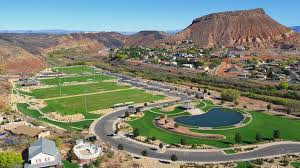 We played all around that big park for about an hour and half until I reminded the kids that I still wanted to go check out the trail down to the river! However, my suggestion was met with all kinds of  whining and  refusals and arguments that they were done playing and ready to go!
"No you aren't!" I said back. "We're checking out that river if it's the last thing we do! And it's the last thing we're doing so start walking!"

A typical theme with some of my children as of lately is to refuse to want to do things that I KNOW they like and will have fun at. I don't quite understand this part of parenting?? For starters I know my children pretty darn well so when I plan fun activities for them to do I KNOW they'll have fun. yet, when I tell them what we're doing, they complain! What is this madness?? So then I make them do said activities anyways when suddenly they are having the most fun of their lives laughing and playing and totally enjoying the activity they first said they would refuse to do! Does this make any sense at all? No it doesn't, but this is parenting in all it's crazy unpredictability.

So next up I forced my unfortunate and miserable children to scooter down this beautiful river trail until we found a quiet opening to the riverbed. And there we spent the next hour laughing and playing and having the most fun ever doing something that they love!
Because they LOVE playing next to rivers in the dirt and mud and rocks and I know this, because I am their mother.

ADVENTURES IN THE VIRGIN RIVER,

How to make Monster Hands and Feet:

Make a big pile of Cattail fluff, get your hands n' feet nice and muddy, then stomp in the fluff til your hands n'feet look like furry and adorable monster limbs. 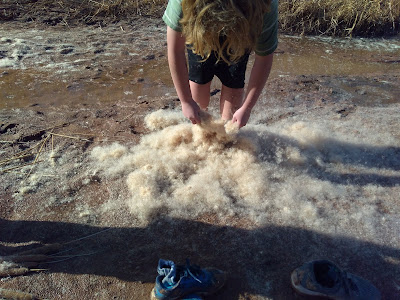 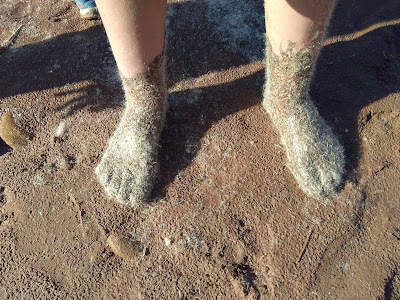 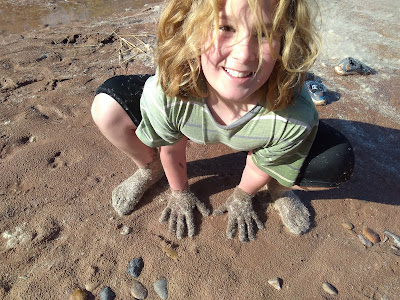 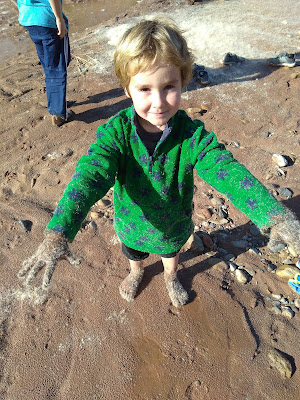 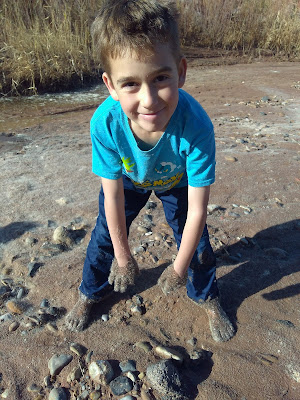 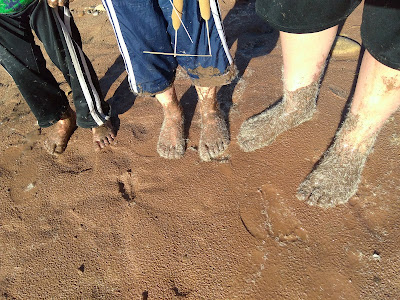 I had a great time down there with my little monsters! These are my favorite moments of motherhood-just hanging out doing nonsense things with these adorable and furry little boys of mine--even when I have to force em!
Posted by Sally Jackson at 7:16 AM